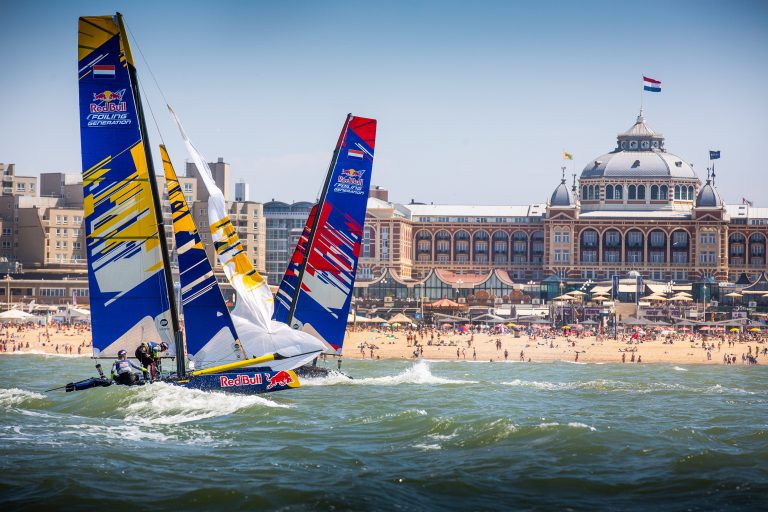 Event participants are seen at Red Bull Foiling Generation in Scheveningen, The Netherlands on the 28th of June, 2018

Fourteen teams of Dutch sailors got the thrill of their young careers when the national championship of the Red Bull Foiling Generation youth sailing series coincided with the conclusion of the famed Volvo Ocean Race in The Hague. With their pro heroes and thousands of spectators looking on, Pieter van Leijen (20) and Thomas Snoek (19) flew to the win and will represent the Netherlands in November’s World Final.

THE HAGUE (NED) – Launched by double Olympic champions Roman Hagara and Hans-Peter Steinacher, Red Bull Foiling Generation seeks the world’s most talented young sailors aged 16 to 20. The 28 sailors in the two-person teams of this season’s Dutch regatta not only received intensive training from the Austrian legends on Flying Phantom catamarans – which can “fly” on foils up to 35 knots (65kmh) – but were also welcomed into the closing events of one of the sport’s most high-profile competitions, the Volvo Ocean Race that sails around the world. The youth sailors were treated to a workshop hosted by Simeon Tienpont, the Dutch pro who has two America’s Cup wins and was skipper of the AkzoNobel in this season’s Volvo Ocean Race, as well as a tour of the boat of the Netherlands’ Team Brunel. And their finals were held on the same waters as the in-port race of the pro event on 30 June.

“It was an exciting race until the last minut. We went head to head againt number two and overtook each other a couple of times during the race.”, said Pieter van Leijen (20) and Thomas Snoek (19) from The Hague and Monnickendam. “Sailing on these boats is a major opportunity for us. The competition was fierce but we made it. We are really looking forward to the World Final in Miami and we will try to win it as well!”

Since Red Bull Foiling Generation was founded in 2015, participants have gone on to numerous Olympic-class programs for the 2020 Games, as well as the professional Extreme Sailing Series. “Red Bull Foiling Generation shows us the new talents in the world, and it seems that their level goes up and up every year,” said Steinacher. “This program offers the best of them a stepping stone to amazing career path.”

Hagara agreed, noting, “This is our second edition in the Netherlands, and it looks like the talent here is growing. The Flying Phantom is the fastest boat of its size and we were racing in quite strong breezes, but all of these young teams managed the racecourse, which is great to see. We have several more national championships to go, and with what we’ve witnessed so far, we’re really looking forward to the World Final.”

The Red Bull Foiling Generation calendar will continue with national regattas in Switzerland, Austria and the USA before November’s World Final in Miami, Florida.

Technical data for Flying Phantom:
The Flying Phantom earns raves as the future of sailing because unlike other small boats, it uses hydrofoil technology to lift completely out of the water. The cutting-edge system allows it to hit blistering speeds of up to 35 knots – almost 40 mph – making it by far the quickest sailing boat of its size in the world. Length: 5,52m (18ft), width: 3,00m, weight: 155kg, mast height: 9,6m, mainsail: 18sqm, Jib: 5,5sqm, Gennaker: 24sqm, crew: 2

Images for editorial use only. Credit: Jarno Schurgers for Red Bull Content Pool