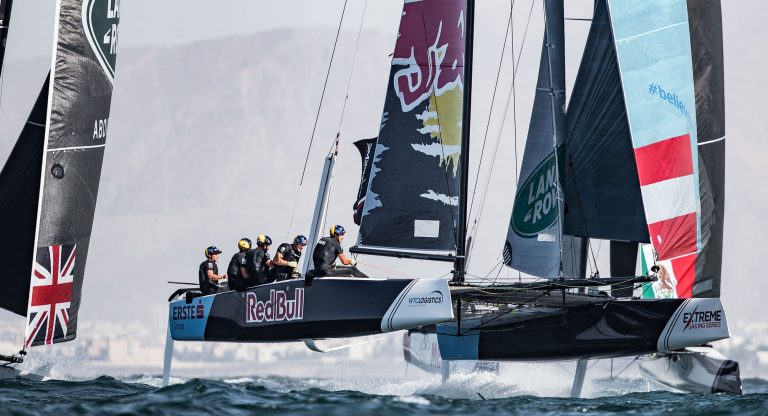 The Extreme Sailing Series 2018. Pictures of the racing on day 3 in Muscat, Oman. Photo by Lloyd Images

Competition is heating up for the third act of the Extreme Sailing Series, and after claiming second place in Barcelona last season, two-time Olympic champions Roman Hagara and Hans Peter Steinacher look to lead Red Bull Sailing to a repeat podium in the Catalonian capital. The beach crowds will witness the spectacle of seven GC32 catamarans foiling full out from 14-17 June 2018.

Barcelona marked a major comeback for Red Bull Sailing in 2017, and insiders tip the team as one of the favorites to win when four days of stadium racing concludes on Sunday. The timing couldn’t be better for the Austria-based sailors to experience those good vibes again: their start to 2018 has been slow, but there’s still time to make up ground, especially with the guidance of sporting legends Hagara (skipper and coach) and Steinacher (sport director and tactician).

“Lots of people in Barcelona still remember when Olympic sailing was held here, and they love the sport. It’s a great place to sail,” says Hagara. “In our series, the standings are tight at the top, and the next stop will already be the midpoint of the season, so there is no holding back here.”

The elite international field is sensing an opportunity in Barcelona, as Denmark’s SAP Extreme Sailing Team – which currently holds the overall lead by a slim two points – will be without its regular helmsman, Adam Minoprio, who is unable to attend. While experienced multi-hull expert Morgan Larson is stepping in, it’s a sure bet that the teams tied just two points back, Alinghi (SUI) and Oman Air (OMA), will pull out all the stops to take advantage of the situation, as will Red Bull Sailing in fifth.

Like all the teams, the sailors on the Red Bull boat – Chris Taylor (helm), Ed Powys, Rhys Mara, Dan Morris and Neil Hunter ­– will have to cope with Barcelona’s unpredictable conditions on the water. While spectators adore the city’s famously sunny skies, for sailors the venue can serve up a multitude of surprises on short notice, from nearly flat seas to big swells and winds that can change drastically within the course itself. It’s the kind of challenge that Red Bull Sailing’s sport director Steinacher loves.

“We came so close to winning here in 2017, and we are definitely aiming for victory this time,” comments the Austrian, who has helped the team to multiple overall podiums. “Barcelona is one of the most famous cities in the world, and sailing in front of the crowds, with the backdrop and great sailing conditions, fully fits with the whole idea of the Extreme Sailing Series. It’s one of our best venues.”

Also in action at Barcelona will be the Flying Phantom fleet, where Red Bull Sailing are defending the championship they earned in the category’s inaugural 2017 season.

The action all begins in Barcelona on Thursday, 14 June, racing every day through the finals on Sunday 17 June 2018.