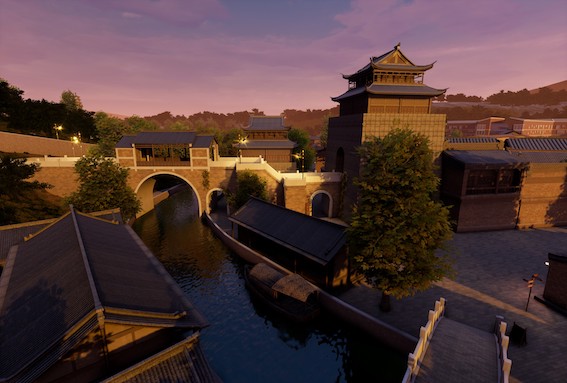 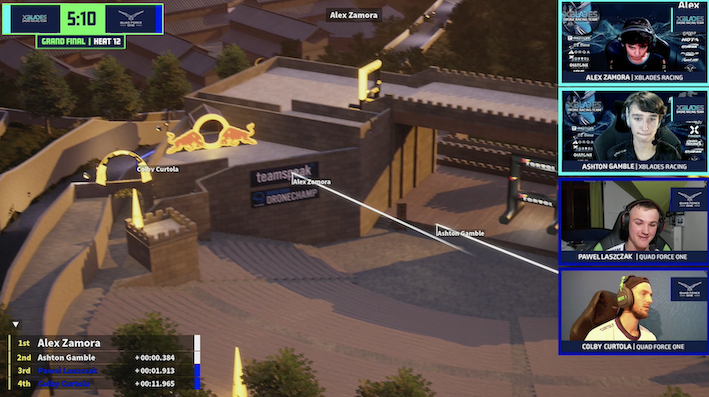 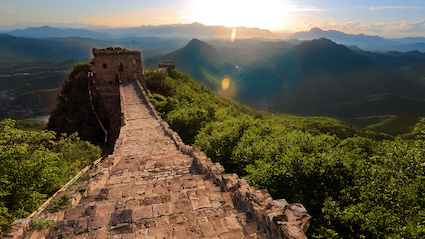 What began as a rout turned into a heart-stopping climax at DCL’s Virtual Drone Grand Prix, Great Wall of China. Defending World Champions XBlades of Great Britain destroyed every team they faced – winning Saturday’s race and wreaking havoc right up until Sunday’s Grand Final. There, the USA’s Quad Force One blindsided the Brits to win the day and keep themselves in the title fight with only one stop to go. Japan’s Raiden Racing thrilled home Asian fans with their first podium of the season, while Denmark’s APEX Racing claimed two podiums of their own.

Water Town, Simatai, Great Wall of China – The XBlades romped from the start in the virtual environment of Water Town, located at China’s Simatai Great Wall. Qualifying is the first look at the tracks for all eight teams, and the reigning titleholders swept the sessions.

In Saturday’s race, XBlades were a four-man wrecking crew, dismantling challenges from the local Chinese wildcard team and Quad Force One. Then the Brits delivered perhaps the most dominant performance ever seen in a DCL Grand Final, getting vengeance for a recent loss to APEX Racing by crushing the Danish team, 17-1. Raiden savored a third-place result.

On Sunday, XBlades continued to steamroll all comers. Even when Quad Force One downed APEX in the Semi-Finals, it seemed improbable that the Americans, who had scored a race win against XBlades in July, could make a stand against the British powerhouse again. But halfway through the Grand Final, Quad Force One led 6-2, and despite a valiant comeback from Britain, the Americans held on for a 10-7 triumph. APEX came away with third.

Looking ahead to the fourth and final Drone Grand Prix of 2020, a slim 120 points separates the overall leader XBlades from APEX, with Quad Force One only 20 points farther back at third overall. Whether XBlades can take a fourth consecutive team championship will all come down to two make-or-break virtual races at Lake Zurich, Switzerland.

The official World Championship of professional drone racing teams, the Drone Champions League is being rocked by a youth-quake in its first-ever virtual season. The XBlades pilots in China ranged from 12 to 16, and the eldest, superstar MinChan Kim, even had to go to school for an exam between the weekend’s races. Minjae Kim of Falcons Racing is 12, while two of the key players for Quad Force One, Silas Aaron and Pawel Laszczak, are 14 and 17 respectively. Several of this year’s young standouts were drafted based on their results in DCL – The Game.

Developers spent 2,000 hours recreating the Simatai landscape. Combining those actual features with impossible virtual obstacles tested the full range of pilot skills, from tower plunges and crowded straightaways to blind corners and the DCL’s longest-ever track. All four racetracks will be available to play in DCL – The Game. Stay tuned to DCL social channels for release dates.

Since 2016, DCL has brought together the planet’s best drone pilots, who compete on eight international teams in spectacular settings globally. Each race is broadcast live, worldwide on TV and online. Anyone can battle for a place in the DCL Draft Selection by playing DCL – The Game, available for PC/Mac, Playstation 4 and Xbox One.

Next: The 2020 World Championship will be decided at the McDonald’s Virtual Drone Grand Prix Lake Zurich, Switzerland: Saturday and Sunday, 3-4 October, LIVE on juked.gg.

Keep up with the DCL all year long at www.dcl.aero and DCL social channels.

Ashton Gamble, XBlades Racing (GBR)
“I think it was by far one of the craziest Grand Finals of all time. Just being able to make it to the finals in DCL takes so much practice and dedication. I’m so proud to be able to compete in DCL, and happy, because it’s such a fun event.”

Alex Campbell, Quad Force One (USA)
“That was a heck of a ride. We may have caught everybody a little off-guard today. XBlades are insanely fast, and we knew we were going to need a miracle. When we got into the finals, we had nothing to lose, and we were getting each other gassed up. Prop [Silas “Propsicle-QF1” Aaron] did some stuff that I didn’t even think was imaginable, and that set the tone. We just fed off that until we had a win. I don’t think any of us can believe it, honestly.”

Jordy Peek, APEX Racing (DEN)
“We know we can beat XBlades – we have before. We know we have the pace.”

About DCL
The Drone Champions League (DCL) is the World Championship for professional drone racing teams: an innovative race series that blurs the lines between virtual and reality. Since 2016, DCL has drawn the world’s best drone pilots, who qualify for each Drone Grand Prix in DCL – The Game and then go on to compete on international teams in spectacular real-life settings, from global capitals to surreal natural wonders. An annual draft selection opens the door to any DCL – The Game player to be recruited into a pro team.

The LED-lit racing drones dart through the custom tracks head-to-head, reaching speeds of more than 160 km/h as the pilots fly them using virtual reality goggles. First to the finish wins, and margins are breathtakingly tight. Each DCL race is broadcast live, worldwide on TV and online. In 2020, DCL takes the season to the virtual world, recreating famous cities, and imagining fantastic new ones, inside DCL – The Game.

3MPG CONTENT BUTLER: DRONE CHAMPIONS LEAGUE
The 3MPG Content Butler is a free media service providing news, stories, photography and footage for TV and web, as well as race results and background information about the Drone Champions League. https://contentbutler.3mpg.ch/
All content is free for editorial use.