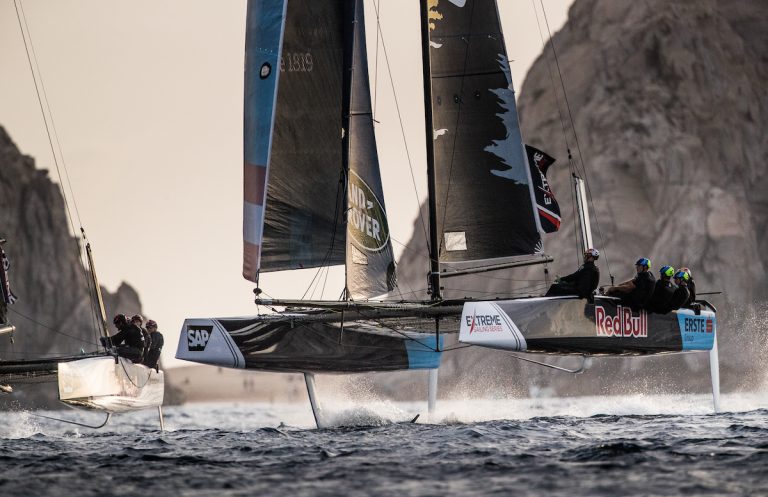 As thousands of Mexican spectators cheered the season finale of the Extreme Sailing Series in Los Cabos, Mexico, on December 3, Austrian sailing heroes Roman Hagara and Hans Peter Steinacher capped off a 10-month campaign by leading their young Red Bull Sailing Team crew to fourth place for the regatta and for the season. Denmark’s SAP Sailing Team took their first-ever season championship in the stadium racing series, while Switzerland’s Alinghi, who were the winners of the act, and Oman Air claimed second and third overall.

LOS CABOS (Mexico) – With America’s Cup contenders like Alinghi, a two-time winner of the Auld Mug, in the mix along with double Olympic Gold Medalists Hagara and Steinacher, the battle for the season podium was fierce right up until the final day of the final act. Red Bull Sailing earned eight race podiums across the regatta that marked the series’ debut in Mexico, but saw its chance to overtake the leaders evaporate when light winds limited the concluding action to only three scoring races.

While disappointed to miss out on what would have been a fourth season podium, skipper Hagara and tactician Steinacher were proud of their crew: headsail trimmer Adam Piggott (GBR), bowman Will Tiller (NZL), and mainsail trimmer Stewart Dodson (NZL), who at 24 is one of the youngest sailors in the entire Extreme Sailing Series fleet.

“Of course the winds are no excuse, everyone had to deal with the same conditions. While the season didn’t go quite as planned, Los Cabos was a beautiful location to end 2017, and I’m glad we had the chance to race here,” Hagara stated. “Our young sailors have been going head-to-head with world-class crews all year and proving their potential. I think they’ll be making their mark on the sailing scene for years to come.”

Hagara and Steinacher are not only renowned competitors with their own experience on the America’s Cup circuit, but also leading proponents of building sailing talent. They’re the creators of the world’s largest youth sailing program, Red Bull Foiling Generation, as well as the Red Bull Youth America’s Cup, both developed to build a pathway toward professional sailing careers. Dodson, Piggott and Tiller are all graduates of the latter program, and Dodson and Piggott contributed to Red Bull Sailing’s third-place finish in the Extreme Sailing Series 2016. The five team members began training for their 2017 campaign in February, with the first race in March, and as the months went by, the international action was a rollercoaster.

“What a season!” said Steinacher. “Of course the highlights were our podiums, with second place in Barcelona and third in Hamburg and San Diego. But just as important for the team were moments like the regatta in the Madeira Islands, where a capsize damaged the boat but we came back to close the act with two race wins. That kind of experience says a lot about our sailors and what they’re capable of.”