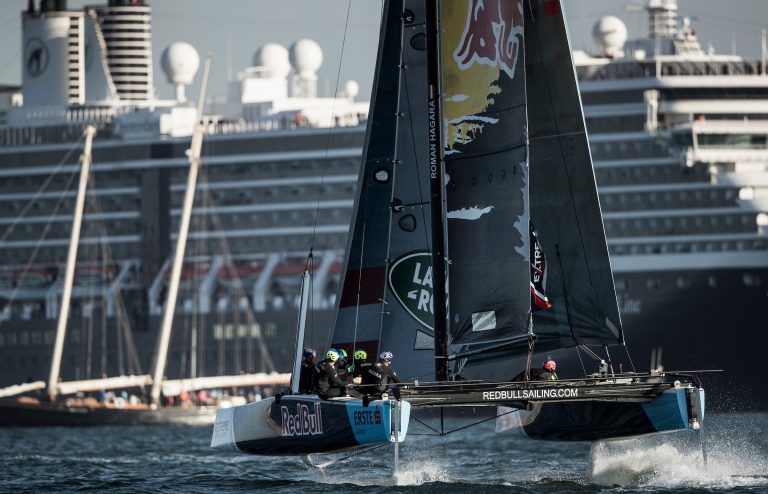 Double Olympic Champions Roman Hagara and Hans Peter Steinacher led the Red Bull Sailing Team to a thrilling 3rd place finish at the seventh act of the Extreme Sailing Series in San Diego, California, USA on 19-22 October, amassing 3 race wins and several podiums. SAP Sailing Team of Denmark took the regatta victory, with Alinghi of Switzerland rounding out the podium in 2nd place. Next up, the climactic battle to clinch overall honors at the Extreme Sailing Series grand finale in Los Cabos, Mexico on 30 November-3 December, 2017.

SAN DIEGO (USA) – With tensions running high and teams pushing hard there were two collisions within the final two races on Sunday. As SAP Extreme Sailing Team and Alinghi fought for pole position, a simultaneous battle for third raged between Oman Air and Red Bull Sailing Team. But the Omani syndicate fell foul of a penalty and watched Red Bull Sailing Team sail its way onto the podium. Red Bull Sailing’s success in San Diego puts them in 4th place in the season standings, with only the final act to go.

San Diego had previously welcomed other prestige sailing events including the America’s Cup. With the Extreme Sailing Series boats racing just five meters from popular Harbor Island across four days, knowledgeable locals and excited tourists turned out in the tens of thousands to watch, and Red Bull Sailing gave them an eyeful right from the start, with a race victory on Thursday. Consistent results across Friday and Saturday kept Hagara’s team in the running, but it was their full-throttle performance on Sunday, that launched them to the regatta podium.

Adding to the excitement in San Diego, Red Bull Sailing had a special guest: 2016 Red Bull Air Race World Champion Matthias Dolderer of Germany. Having just completed his 2017 season with second place at Indianapolis Motor Speedway, the German with a passion for speed came straight to California to support Hagara and Steinacher, and he couldn’t resist an invitation from the Austrian sailing superstars to come on board Red Bull Sailing’s super-light GC32 catamaran as a guest racer. “These boats fly over the water – it is extremely fast!” said an enthusiastic Dolderer. “Teamwork, tactics, concentration and energy are key to winning races. I am impressed by the performance from my friends Roman, Hans Peter and their crew.”

Now it all comes down to the Extreme Sailing Series grand finale at Los Cabos, Mexico on 30 November through 3 December 2017.