We all love to be challenged on a mental level – whether that’s solving the daily crossword, brainy online games or getting our hands on a Rubik Cube.

A brand new platform Red Bull Mind Gamers has been created to engage and excite those who wish to challenge their minds. It offers interactive online games designed by some of the smartest brains in the industry, such as the MIT Game Lab or the Technical University of Vienna and thought-provoking expert-driven content. On top of that, Red Bull hosts a real-world challenge, that puts the smartest masterminds out there to the ultimate test. They compete at the first global Escape Room Championship, named “Mission: Unlock Enoch”. The game was invented at an „Escape Room Game Jam“ at the Massachusetts Institute of Technology, organized by the MIT Game Lab, world-renowned pioneer in game design and Dr. Konstantin Mitgutsch, Affiliate Researcher at the MIT Game Lab and Founder of Playful Solutions, Vienna.

In a multi-city qualifier event series, with over 75 events in 22 countries, more than 9.000 players were puzzling their way through a 20 minute multi-screen puzzle challenge in teams of four.

The best national teams will head to Budapest, Hungary, to compete at the first-ever ESCAPE ROOM WORLD CHAMPIONSHIP, where they will face a never-before-seen Escape Room based on Quantum Logic.

The Escape Room World Finals are created by escape room designer Dr. Scott Nicholson, visiting professor at MIT, guru in his field, and Professor of Game Design and Development and Director of the BGNlab at Wilfrid Laurier University in Brantford, Ontario, Canada and developed by Fox in a Box.

Rather than a common “escape room game” based upon solving puzzles, this event brings escape gaming to a new level: “We wanted to create a room that was about creating interesting experiences that are not what would be in a typical escape room. We focus on challenges that are more active and visual, and keep the team working together during most challenges. This means we de-emphasized searching and quiet cerebral puzzles, avoided using padlocks and black lights, and instead thought about ways to embrace the concept behind Red Bull vitalizing the body and mind.”, says Dr. Scott Nicholson.

Now if this makes your synapses twist and neurons fire, there is still one chance to earn a spot for the World Finals: the four best players of a global online high-score list win a “Wildcard“ and get invited to compete against the best mind gamers from all participating nations. 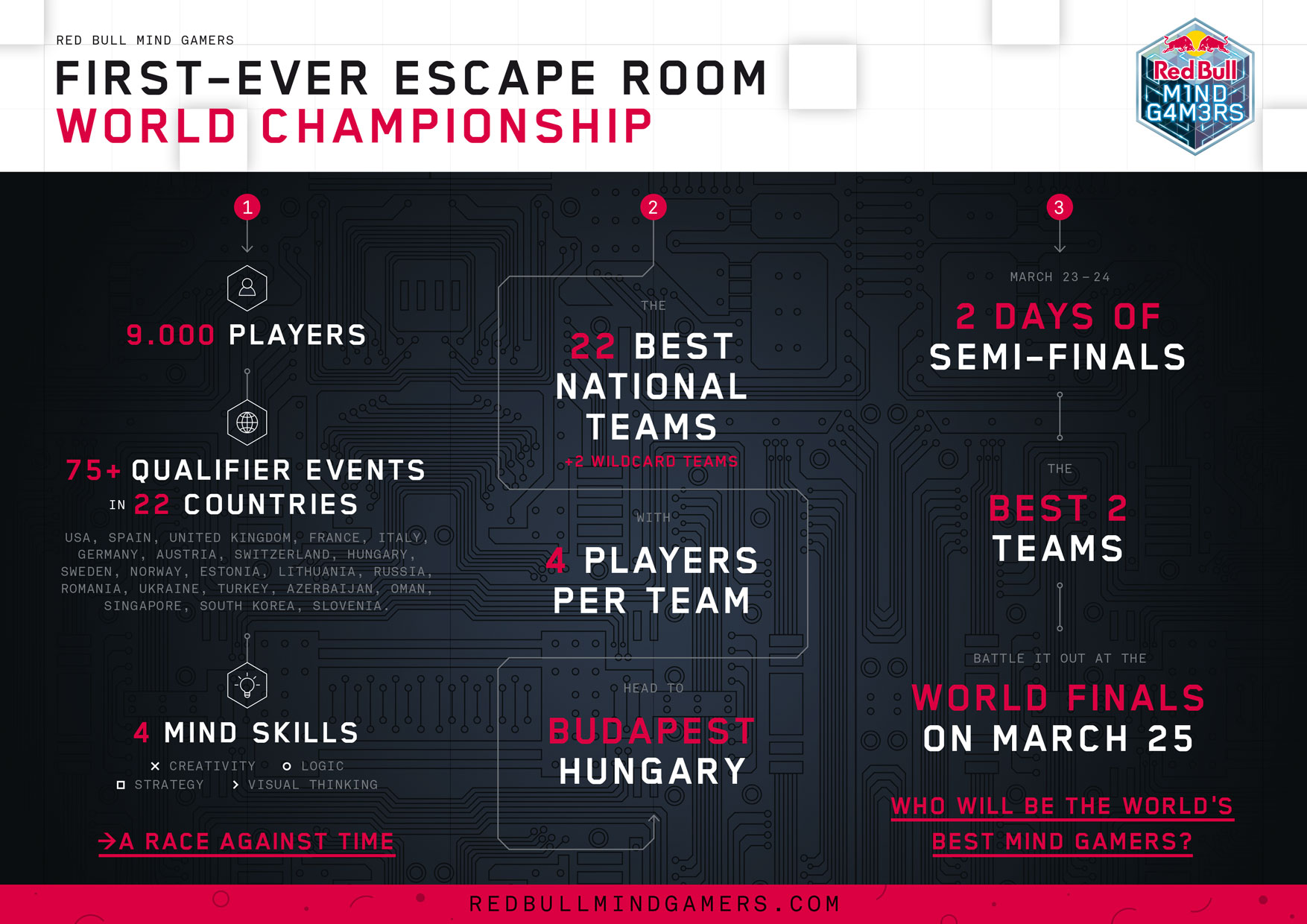 Mission Unlock Enoch is a fully story-based Escape Room Championship designed for curious minds and escape room enthusiasts. It’s the first escape room based on quantum logic, and is designed to challenge 4 problem-solving skills: creativity, logic, visual and strategic thinking. Players are encouraged to communicate frequently and divide tasks efficiently in order to solve all the puzzles before time runs out.

The story of the final Escape Room is inspired by “MindGamers” The Movie, a film my Terra Mater. It has physical and mental aspects to many of the challenges, inspired by challenges on reality television.

Is a unique and interactive event in 3 stages, where teams solve challenges within a time limit.

The challenge takes you from proving your skills online, to competing in teams of 4 in local Qualifier Events, to the Mind Gaming finals: an ultimate mixed reality the Escape Room World Finals, in Budapest in March 2017.

Can I still qualify?
The national qualifier events are over, but there is still the option to earn a Wildcard.

The 4 best global players on the global high score list, earn a „Wildcard“ for the Mission Unlock Enoch World Finals in Budapest in 2017.

What’s the prize for the World Champion?
The global winner team will be invited to a puzzle design workshop at the MIT Game Lab. 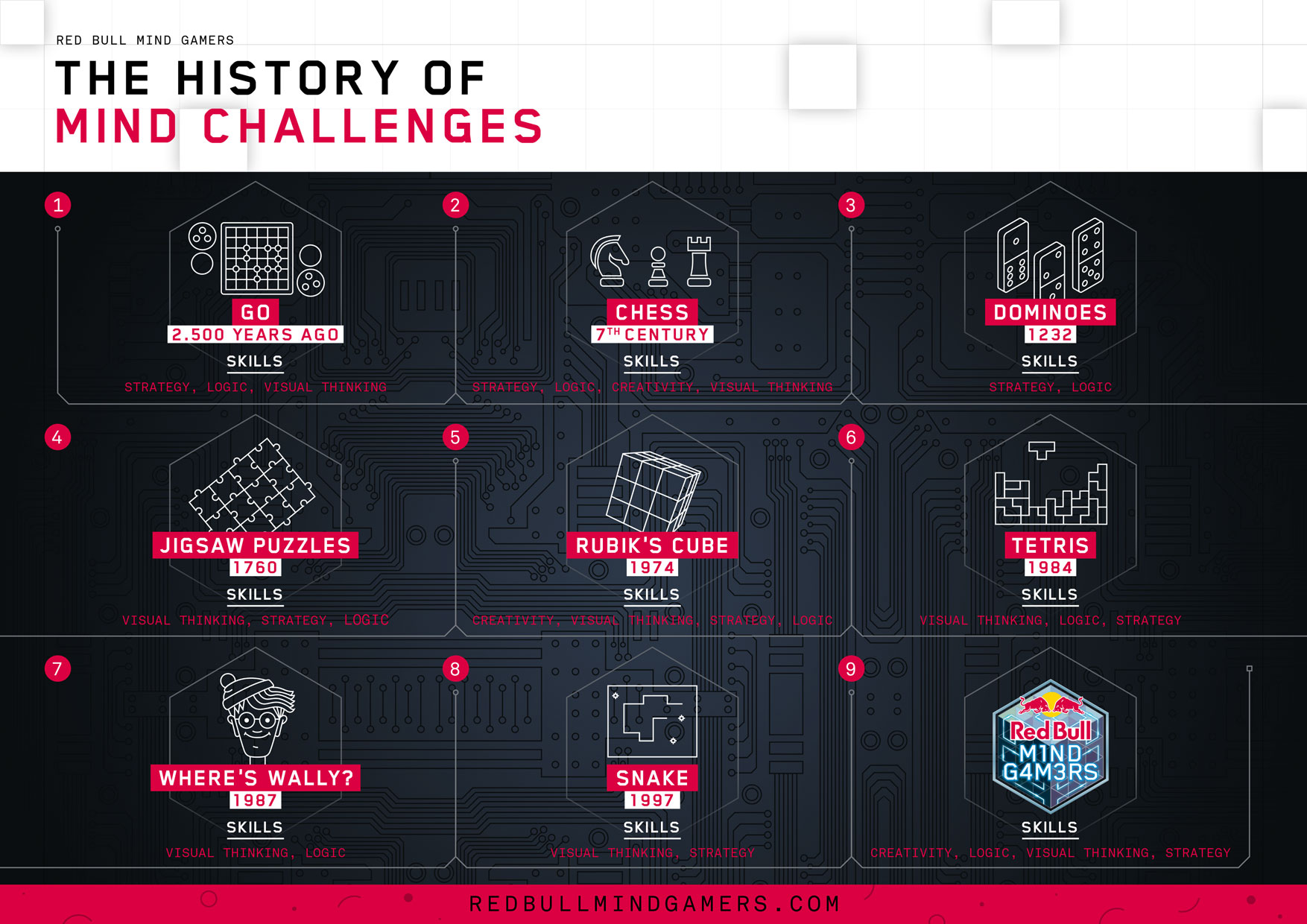