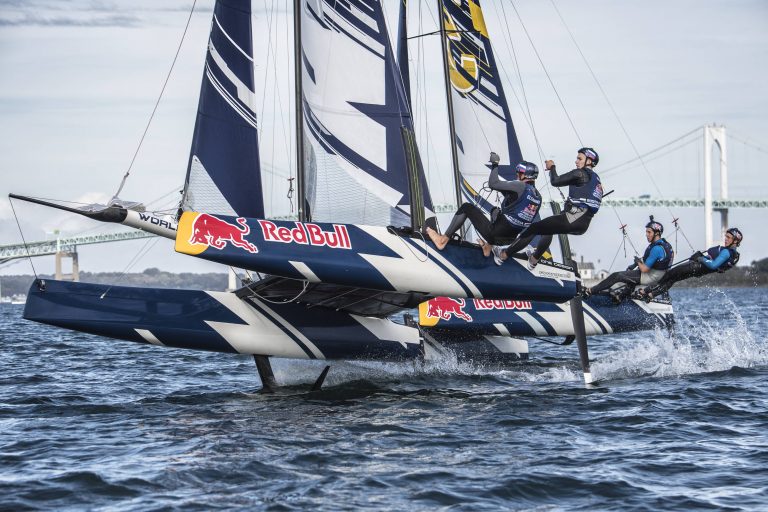 The brainchild of double Olympic champions Roman Hagara and Hans Peter Steinacher, Red Bull Foiling Generation seeks the planet’s best young sailors to learn and compete in the next wave of sailing: high-speed foiling catamarans. The champions crowned in France, New Zealand, the Netherlands, Switzerland, Austria and the USA will go on to represent their countries in November’s World Final.

SALZBURG (AUT) – After getting off to a flying start in 2015 and 2016, Red Bull Foiling Generation is back to discover the world’s top youth sailors. Developed by sports directors Roman Hagara and Hans Peter Steinacher, the series gives wings to talented sailors aged 16-20 by introducing them to the type of cutting-edge foiling technology used in the America’s Cup. Olivia Mackay, who helmed New Zealand to win the Red Bull Foiling Generation World Final in 2016, has gone on to helm a wildcard boat in the Extreme Sailing Series, and at least 40 previous participants are currently in Olympic-class programs for Tokyo 2020.

Now, a new crop of future sailing stars have their own chance to shine, like Louis Flament and Charles Dorange, who won the French national regatta that kicked off the season in La Baule last October. The race calendar continues in 2018, for a total of six global stops before the climax of November’s World Final: the first to be held in Miami, Florida, USA.

At each of the national championship events – including brand-new destinations like Achensee, Austria – Red Bull Foiling Generation provides the boats and expert coaching. Each two-person team will race the innovative Flying Phantom, a spectacular multihull catamaran capable of reaching speeds up to 35 knots (nearly 40mph).

“We created this series to give outstanding young sailors the tools to follow a unique career path, potentially moving on to professional careers,” says Steinacher. “Ever since we launched Red Bull Foiling Generation, interest from sailors and national sailing federations has been high.”

All participants gain invaluable experience, as they are coached by Steinacher and Hagara in taking on the demanding challenge of foiling. The Austrian legends are also the masterminds behind the Red Bull Youth America’s Cup, where victorious skipper Peter Burling learned skills that helped him to win the 2017 America’s Cup at the helm of Emirates Team New Zealand.

“I always say that it’s like in motorsport: young people start in karts and they keep moving up toward Formula 1,” Hagara explains. “We want to give these sailors a chance to showcase their skills, and for some of them, the Olympics, the Red Bull Youth America’s Cup or the Extreme Sailing Series could be the next step.”