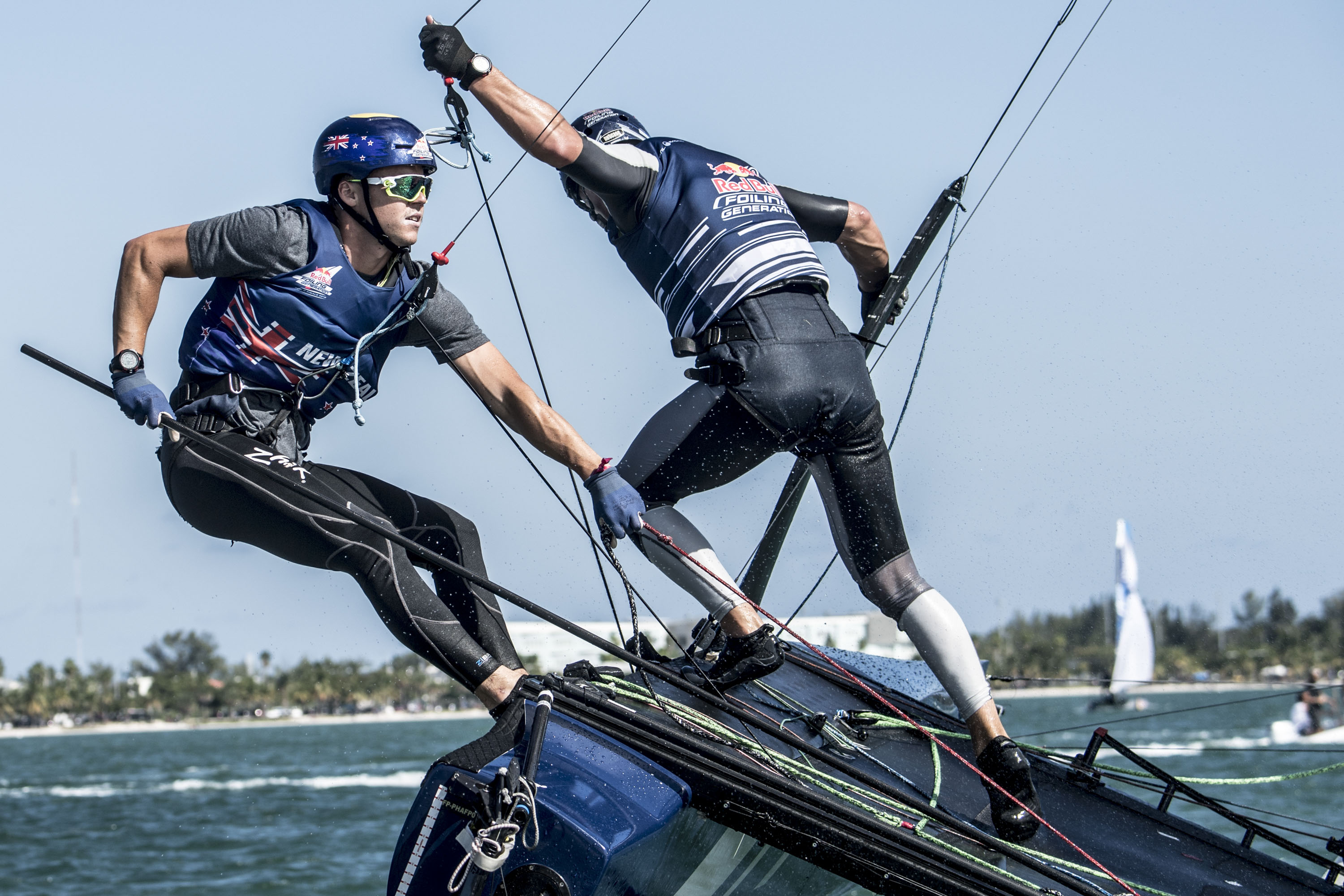 Following in the wake of triumphant New Zealand sailors in 2016, young Kiwis Isaac McHardie and William McKenzie flew along the Miami shoreline on Sunday to win the second edition of the Red Bull Foiling Generation World Finals. In the climax of a yearlong search for the planet’s most talented young sailors, the pair beat out 15 other international teams, with duos from Belgium and Sweden also outstanding in second and third.

MIAMI, FL (USA) – With perfect conditions and cheering Miami crowds, the Red Bull Foiling Generation World Final from 9-11 November was a festival of foiling, but for 16 of the planet’s most talented teams of sailors aged 16-20, the regatta was a hard-fought battle. Sunday’s final delivered perhaps the closest start in Red Bull Foiling Generation history, as all four boats were within centimeters of each other to the first mark. Then the Kiwis McHardie and McKenzie took control, edging to first and never letting go until they crossed the finish line ahead of the second-place Belgians Morgan Wirtz and Henri Demesmaeker and the third-place Swedes Emil Järudd and Hugo Christensson, with Austria fourth.

The drama continued when the winning New Zealand team capsized just after passing the finish line. “The breeze picked up a bit, more than we’ve had in the past few days, and the boats were a lot faster, more out of control, but I think everyone here had a lot of skill. Every race was very competitive and you could never rule out any sailor because everyone was the best in their country, so it was hard racing,” said McKenzie. “Sailing a foiling boat is a completely new concept to me, and to have great coaches like Roman and Hans Peter to assist the learning is amazing. I’m ecstatic and looking forward to seeing what the future brings.”

Double Olympic champions Roman Hagara and Hans Peter Steinacher of Austria developed and launched Red Bull Foiling Generation in 2015 to find the world’s best young sailors and provide a stepping-stone to a potential career in the sport. They personally coach the youth teams on Flying Phantom hydrofoil catamarans, the fastest boats of their size.

“It’s been gratifying to see the interest in Red Bull Foiling Generation around the world, as well as the progress sailors from the program are making in the sport,” stated Hagara. “Olivia Mackay and Micah Wilkinson, who won the 2016 World Final, went on to win the Flying Phantom Series of the Extreme Sailing Series together in 2017, and since then both of them have raced on GC32s in the Extreme Sailing Series, in addition to pursuing Olympic campaigns. The future of sailing is looking very strong and very exciting.”

McHardie, who sails with McKenzie in the Olympic 49er class, commented, “The 49er isn’t a foiling boat, so sailing the Phantoms taught us skills in foiling and speed. I’m really happy and looking forward to following in Micah’s footsteps and hopefully in the future having some awesome opportunities.”