From track to tack – F1 stars race with sailing icons 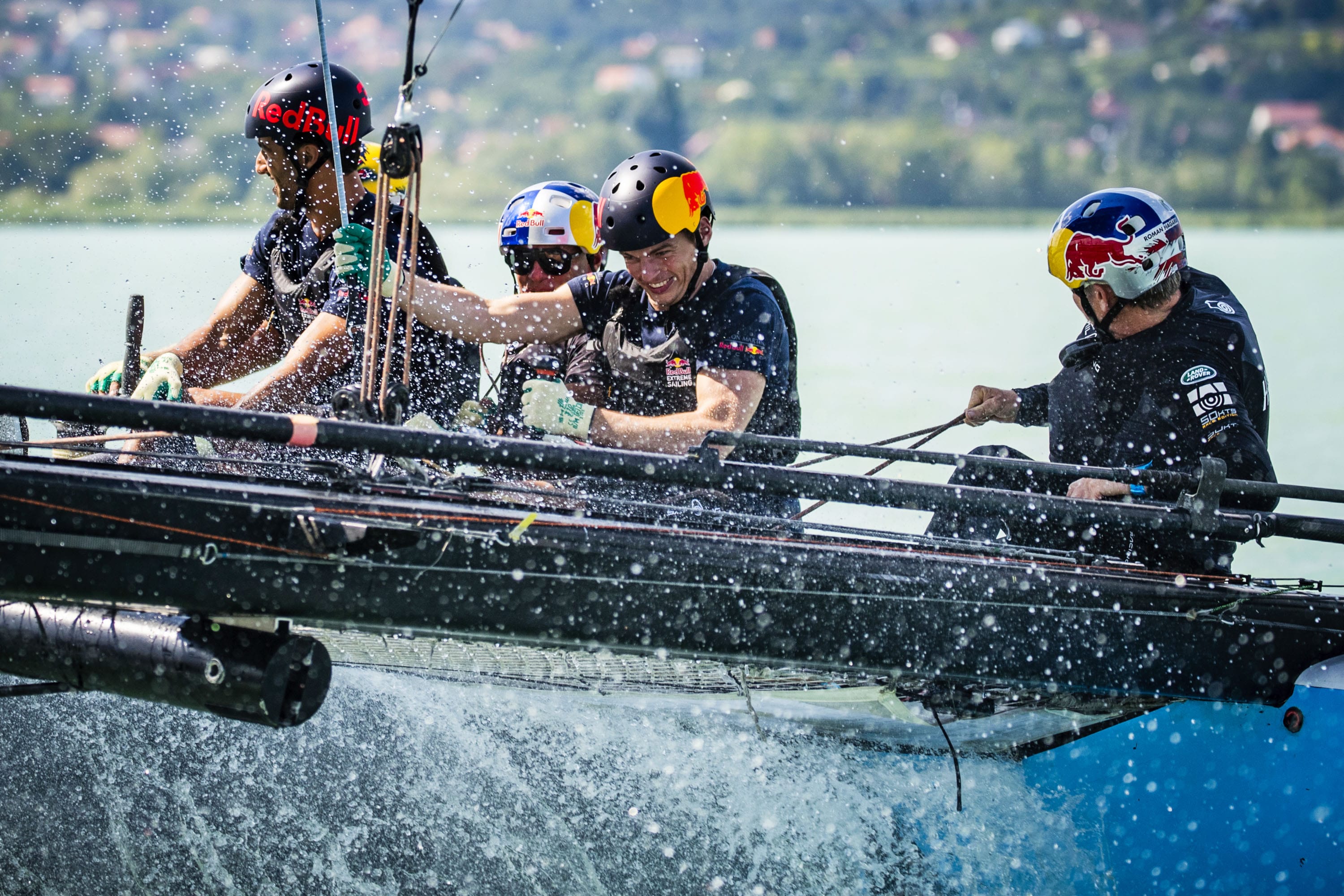 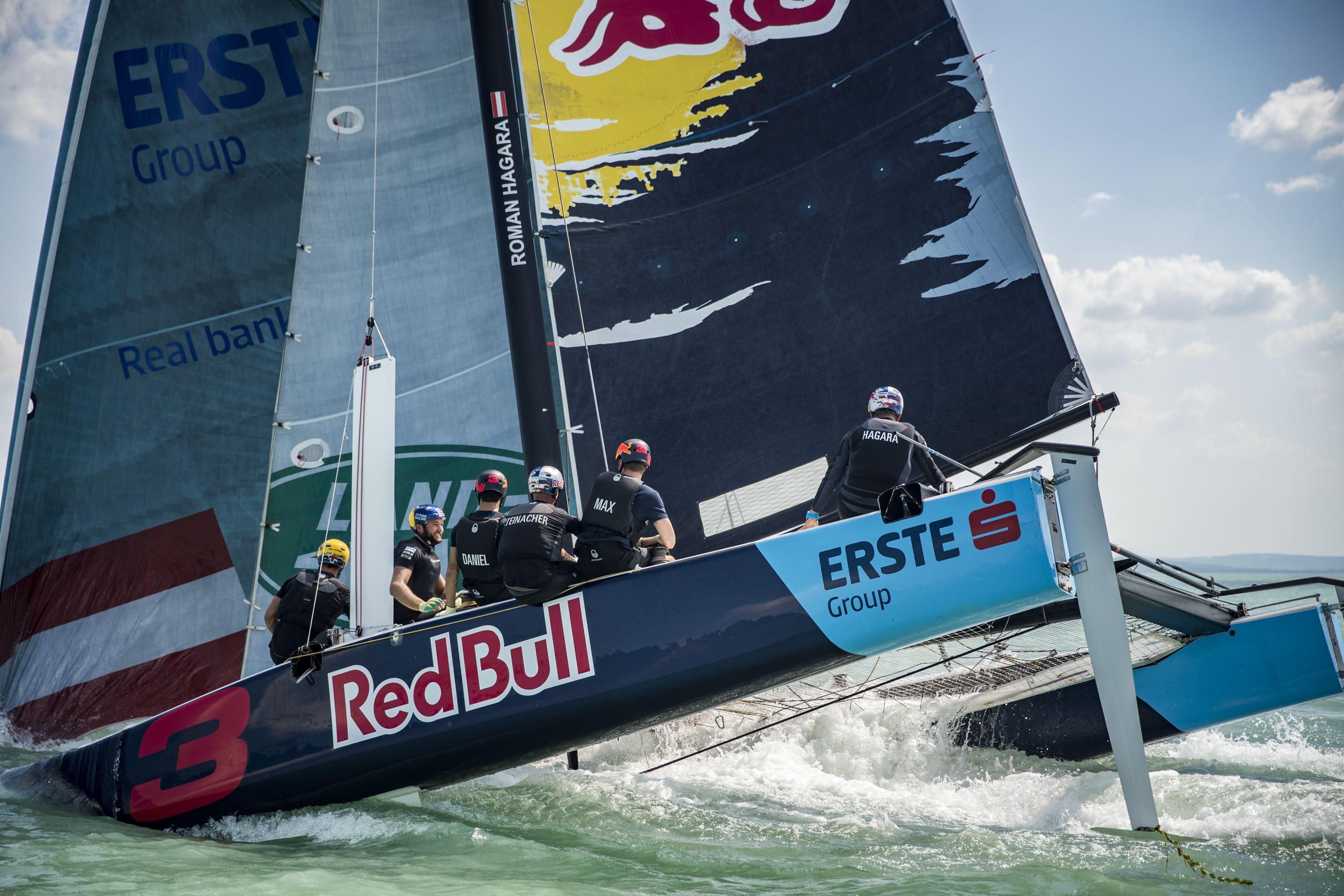 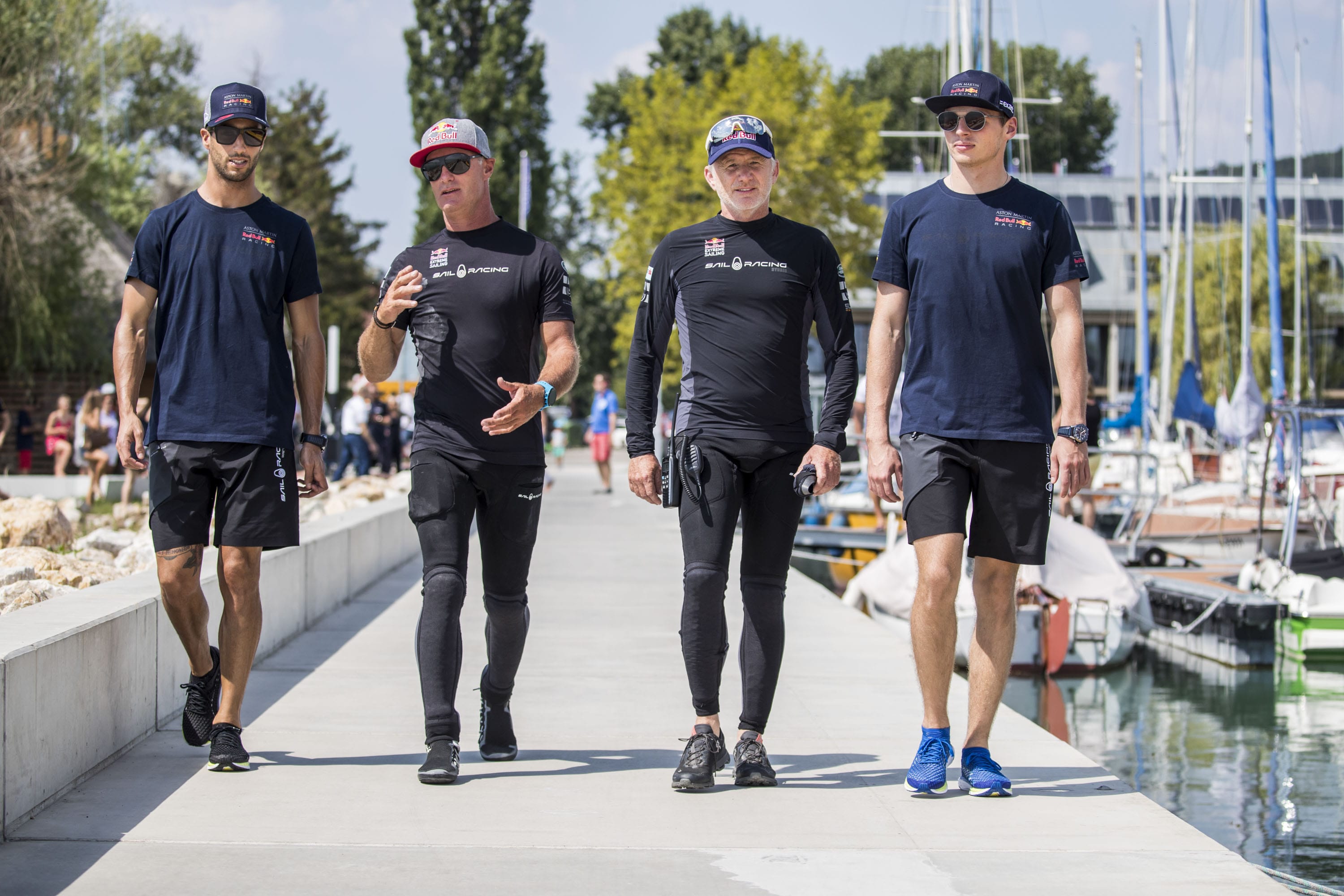 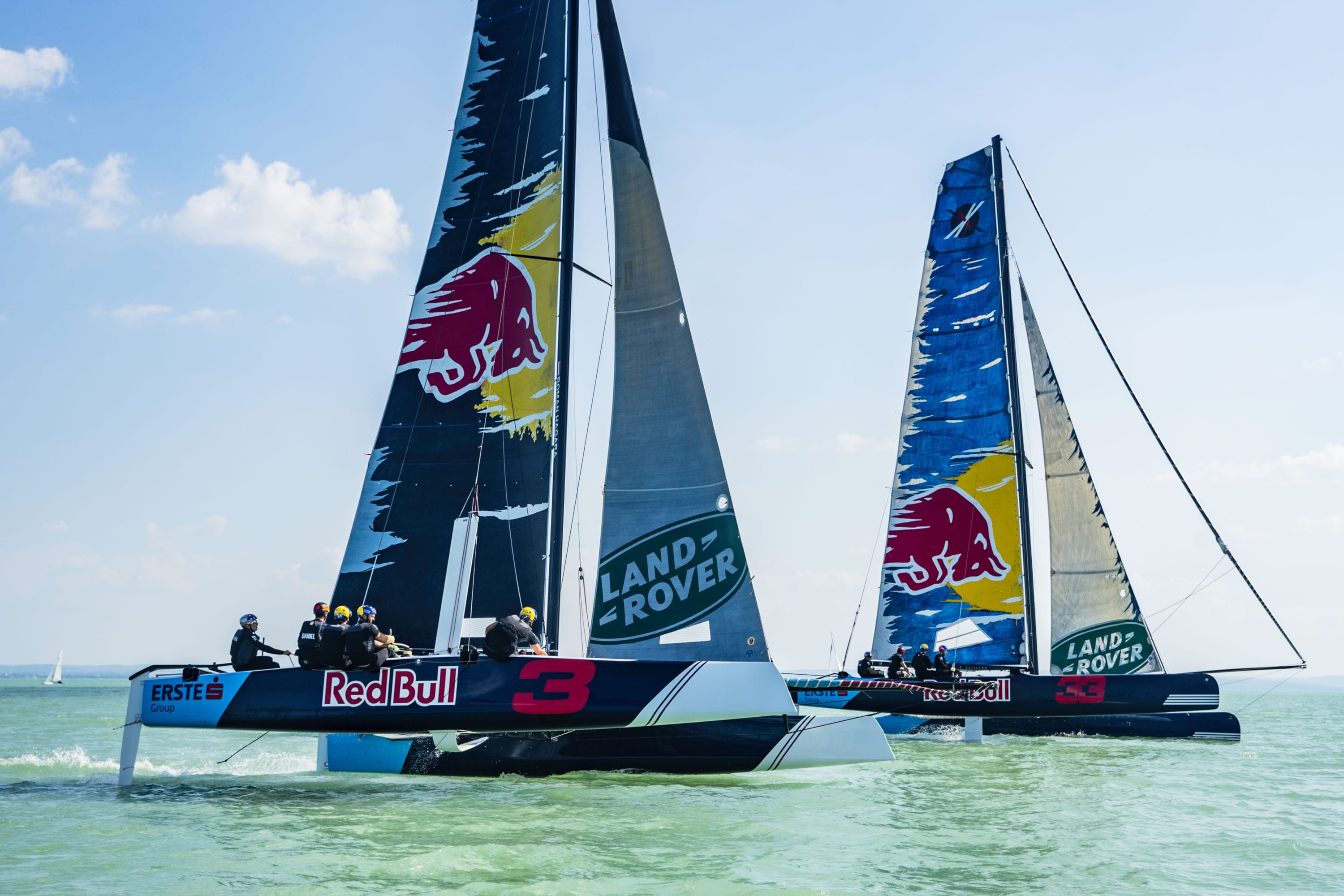 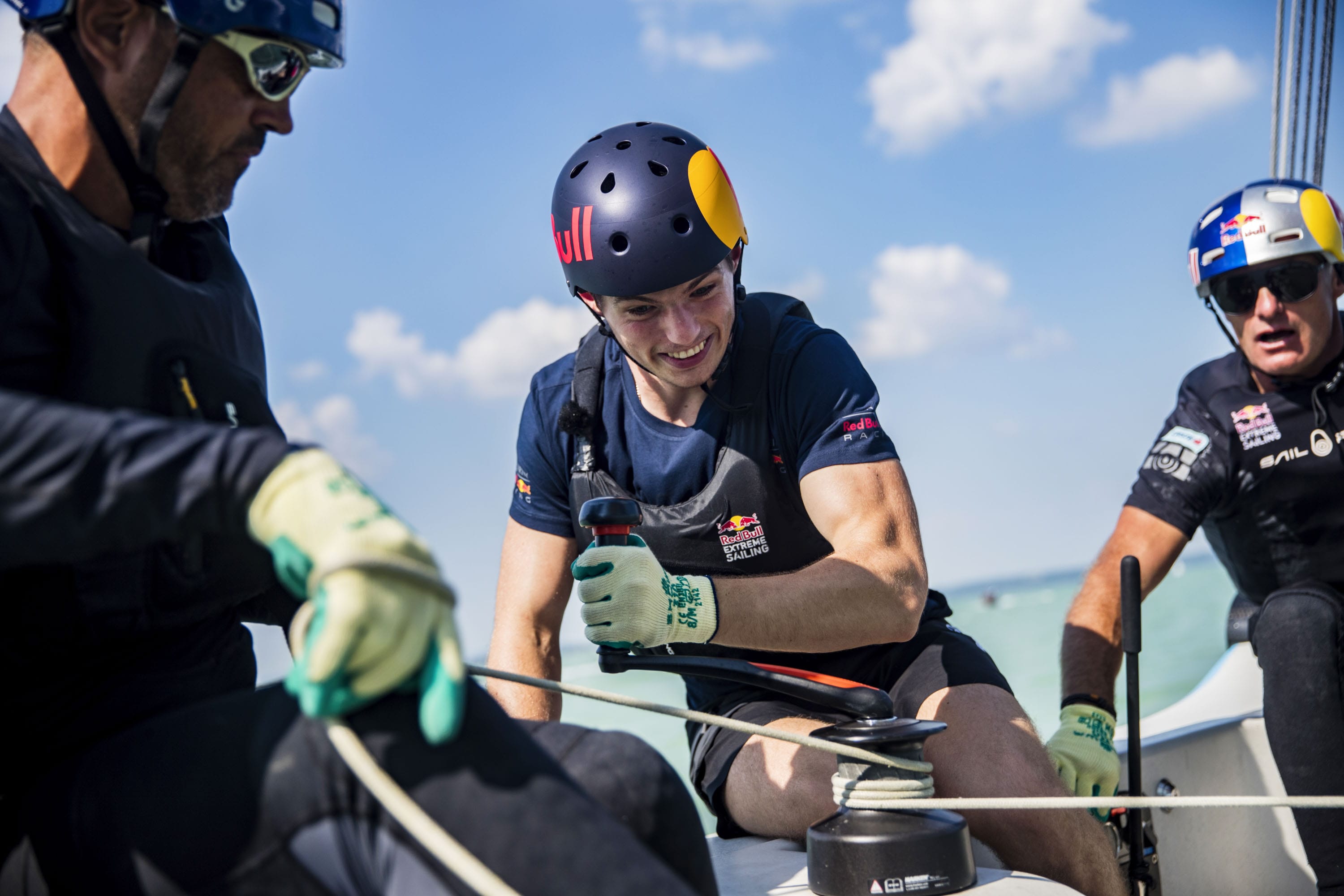 Ahead of racing at  Formula One’s Hungarian Grand Prix this weekend, Aston Martin Red Bull Racing drivers Daniel Ricciardo (AUS) and Max Verstappen (NED) met up with Austria’s double Olympic Gold Medalists Roman Hagara and Hans Peter Steinacher to hit the water on Hungary’s Lake Balaton in cutting-edge catamarans. With four diehard competitors on the water, what started as a pleasant day in perfect conditions turned into a full-out race at top speed, with a shared passion for speed and drive to win.

LAKE BALATON (HUNGARY) – Hagara and Steinacher, who are preparing for the Erste Kékszalag Grand Prix on the lake, welcomed Ricciardo and Verstappen onto Red Bull Sailing’s 40-foot catamaran as well as the GC32 foiling multihull that the team races in the Extreme Sailing Series. After the most successful Austrian summer sport athletes and other members of the Red Bull Sailing team gave the drivers an introduction to what high-tech sailing is all about, it wasn’t long before the F1 drivers decided to pair off with the Austrians for some match racing across the famous lake, with Hagara and Ricciardo manning the GC32. Meanwhile, Steinacher and Verstappen boarded the X40, and were almost immediately driven into a nose dive from the winds, a dramatic – and tough – start.

“I had never sailed before in my life, but this was actually very cool and really fast!” said Verstappen. “I learned a lot from Roman and Hans Peter, and I think it was a great start into sailing.”

Once the X-40 team bounced back quickly from their dunking, the race was on. Compared to Formula One, in sailing wind is the fuel, and in Lake Balaton’s ideal breezes the boats flew on the water at velocities reaching 33 knots (61kmh/38mph).

“It’s really fun to have Max and Daniel on the boats. They are both quite strong, they pulled everything very hard,” stated Steinacher.

Ricciardo offered his own views on the experience. “I guess extreme sailing is the best way to describe it, and I hadn’t done anything like this before, not on a weapon like this,” said the Australian. “The boats are impressive – the pure size and the height of the sails were bigger than I anticipated. And Roman and Hans Peter are super cool guys. I found myself on the winch most of the time, and apparently we nearly capsized, but they made me feel safe so I didn’t think much of it!”

“Foiling on our boats, touching 35 knots of speed – that’s what we all like,” declared Steinacher. “Max and I were leading, but the finish line was always moving. I was pretty sure we had done it.” Hagara and Ricciardo disagreed, asserting, “It was a really close finish, and we thought we won, so we celebrated by jumping into the water.”

At the end of the day, Ricciardo and Verstappen headed back to Budapest. Ricciardo, who is currently fifth in the F1 standings with Verstappen right behind in sixth, shared his thoughts on the upcoming race at the Hungaroring, saying, “I love the circuit. I’ve had good memories there. It’s tight, twisty and a good atmosphere, and I think it’s going to be one of our stronger circuits to date. Quietly confident.”

The young F1 stars will have two friends from the sailing world supporting them in person. “Roman and I will go and watch,” Steinacher shared. “I hope they can win the race!”

About Roman Hagara and Hans Peter Steinacher
Roman Hagara and Hans Peter Steinacher are Austria’s most successful summer sport athletes, having won two Olympic gold medals (Sydney, Athens) and numerous world championships. They are the only Austrians to have competed on the America’s Cup World Series. Determined to see sailing progress to the next level, they groom the next generation of sailors by leading the Red Bull Sailing Team in the Extreme Sailing Series and by serving as sports directors for Red Bull Foiling Generation and the Red Bull Youth America´s Cup.