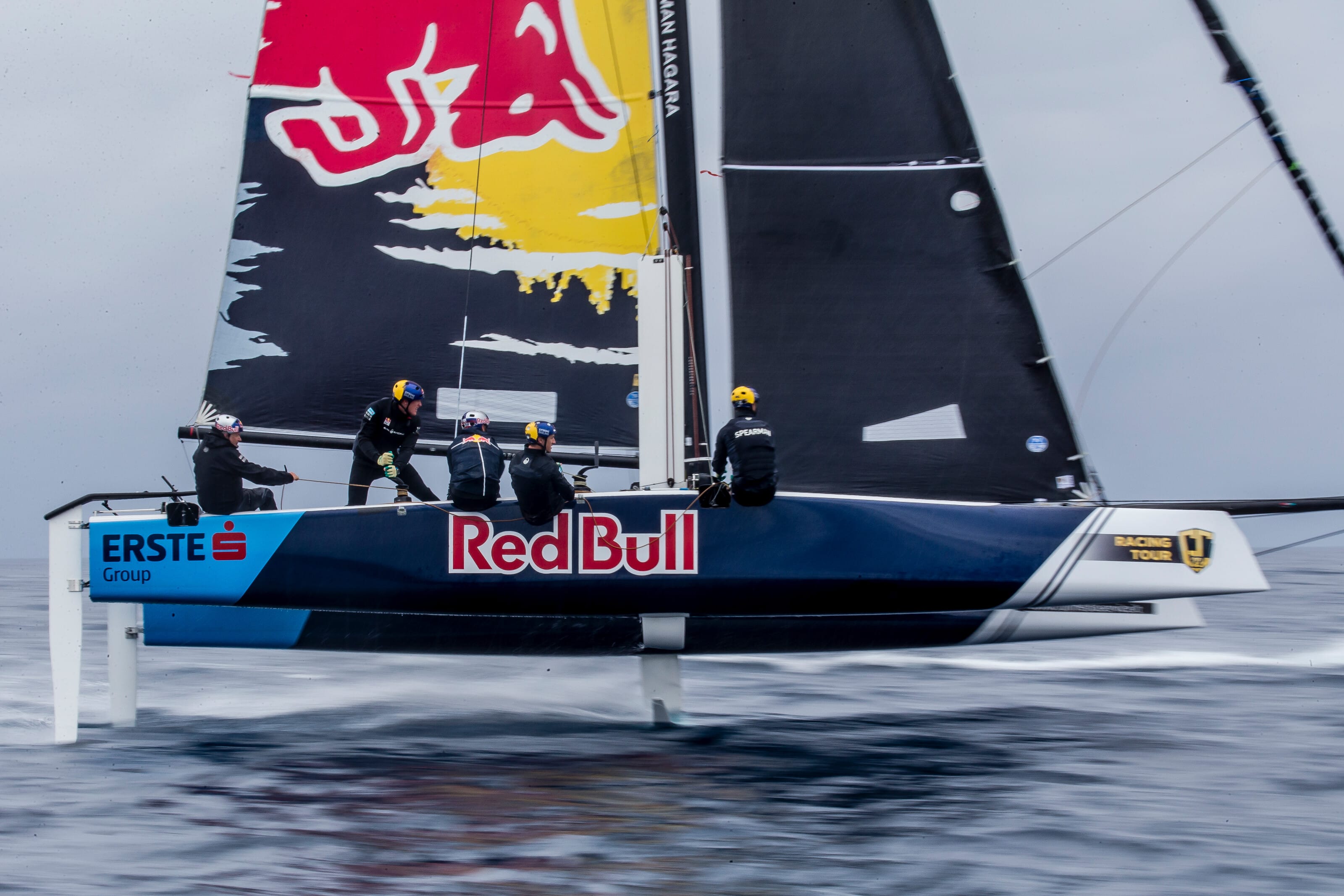 The second stop of the GC32 Racing Tour is the 2019 GC32 World Championship at Lagos, Portugal, and while Red Bull Sailing may be new to the tour this season, they are not new to top-level competition: the team’s strong young crew is led by two of the most experienced contenders in sailing. Skipper/helmsman Roman Hagara and tactician Hans Peter Steinacher have won just about everything there is to win in their sport, including two Olympic golds, and they guided their team at the first official GC32 World Championship just last year. On 26-30 June, they will bring the skill, and the steely nerve, to take on a GC32 class that’s tougher and faster than ever.

Lagos (PORTUGAL) – Ten teams will be racing in Lagos, a historic port on Portugal’s Algarve coast, near the southwestern tip of Europe. Among them, the Austrian legends Hagara and Steinacher will take on the defending GC32 World Champions Team Tilt of Switzerland, as well as Oman Air, who currently head the GC32 Racing Tour leaderboard after claiming victory at the season opener in Sardinia last month. Just behind Oman in the overall standings are three fierce competitors, two-time America’s Cup winners Alinghi (SUI), Sir Ben Ainslie’s INEOS Rebels UK, and France’s NORAUTO, which is helmed by Volvo Ocean Race-winning skipper Franck Cammas, with Red Bull Sailing hot in pursuit at fifth position.

“We have multiple objectives here in Lagos,” says Steinacher. “We were pleased with our first race in the GC32 Tour, where the competition is even tighter now that it has combined with teams like us from the former Extreme Sailing Series. With four races to go, we want to move up the tour standings. But we also have our eyes on the World podium. The possibility to achieve both in the same regatta is a huge motivation.”

Four days of racing start on 27 June, with up to five races each day and a mix of reaching and upwind starts, similar to other acts on the GC32 Racing Tour. The World Championship will also include a new “Cascade Sopromar Speed Challenge,” sailed over a course comprising two reaches with a gybe in-between. The team that records the highest average speed will win the coveted prize.

Joining Hagara and Steinacher on the Red Bull GC32 areAustralia’s Rhys Mara (trimmer), fellow Aussie Mark Spaermann (board trimmer), and Sweden’s Julius Hallström (bowman). One big advantage for the team in the 2019 World Championship: Hagara and Steinacher will have a full onboard presence, whereas in 2018 Hagara was largely focused on coaching the boat to develop the next generation. He is eager to face off against the other A-list teams in Portugal.

“The venues on this tour are selected to allow the maximum possible foiling time, and Lagos is no exception. We expect lots of sunshine for the crowds, and when 10 boats of this high level are flying on their foils, winning the World Championship is going to take an outstanding effort, plus some luck as well,” comments the Red Bull Sailing skipper, whose boat was involved in a collision at the season opener. “We will definitely be aiming for the podium in every race, and let’s see what the final results bring on Sunday!”

About the GC32 Racing Tour
The GC32 class sets sail into 2019 with a circuit that’s stronger than ever, thanks to its teams consolidating in the GC32 Racing Tour. Course configurations are similar to those used in the America’s Cup, and venues are chosen with the aim of providing the best chance of optimum conditions to get the catamarans flying on their foils. The 2019 tour visits four venues across southern Europe and concludes with a fifth race that, for the first time, will be outside Europe. Schedule 2019: