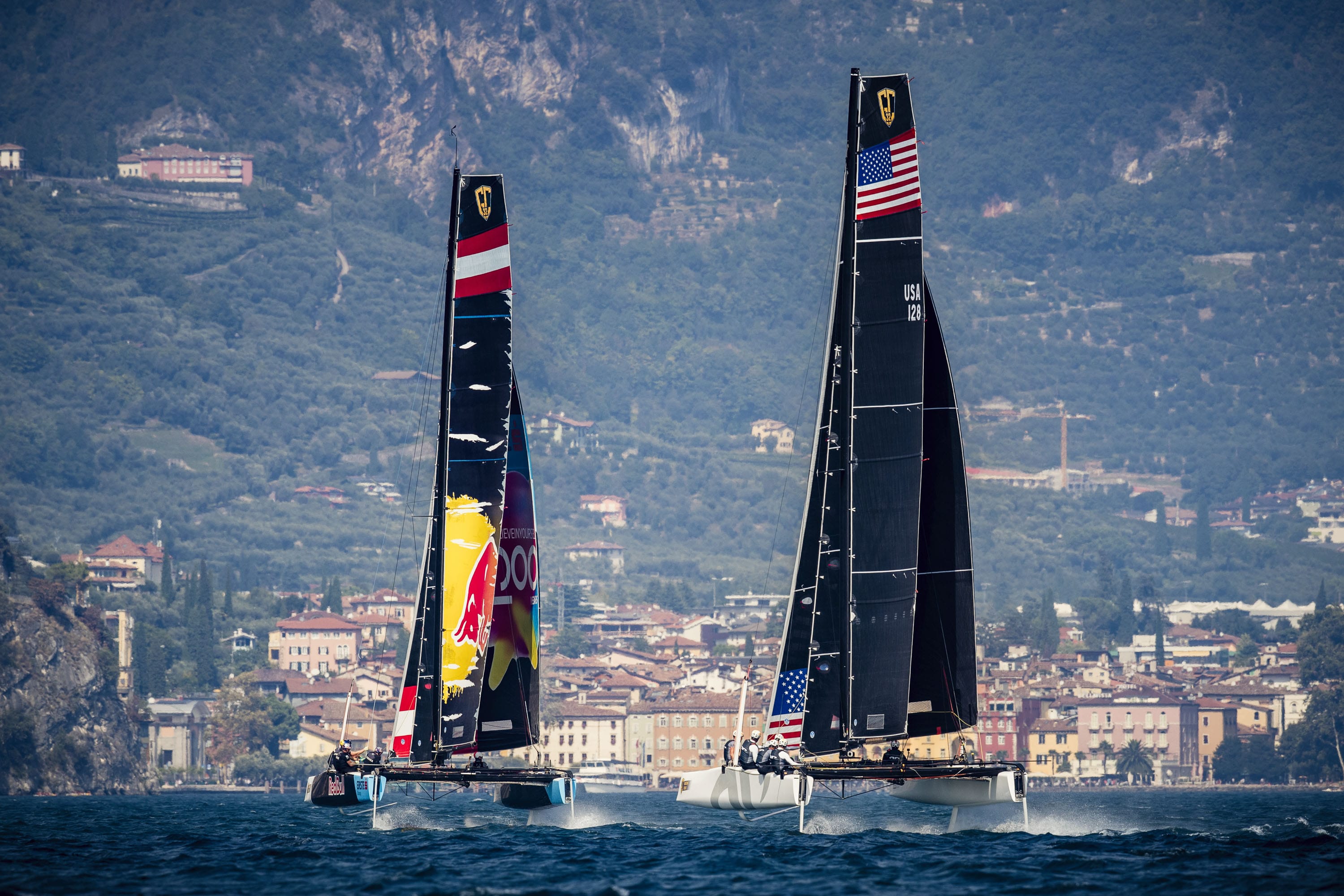 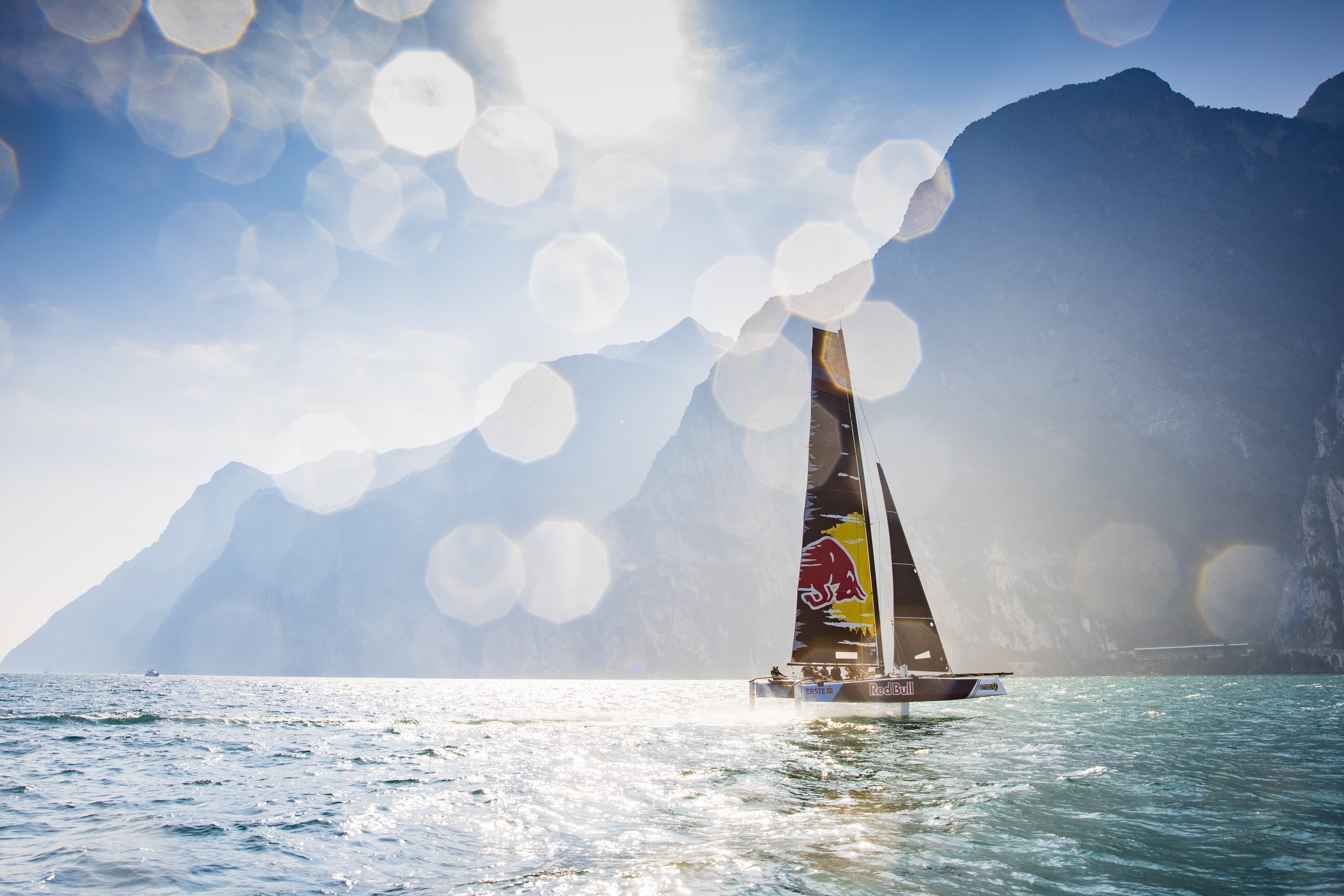 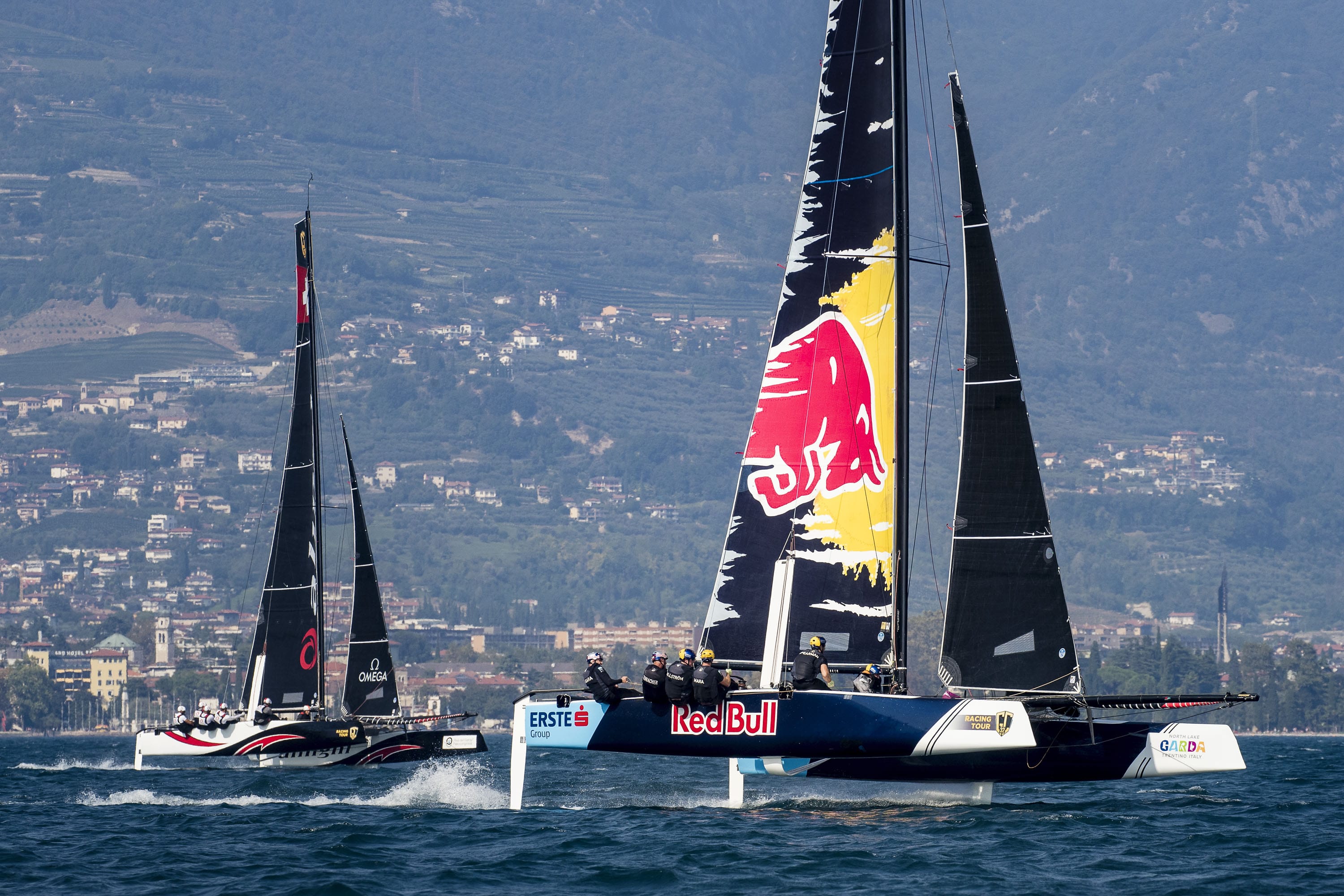 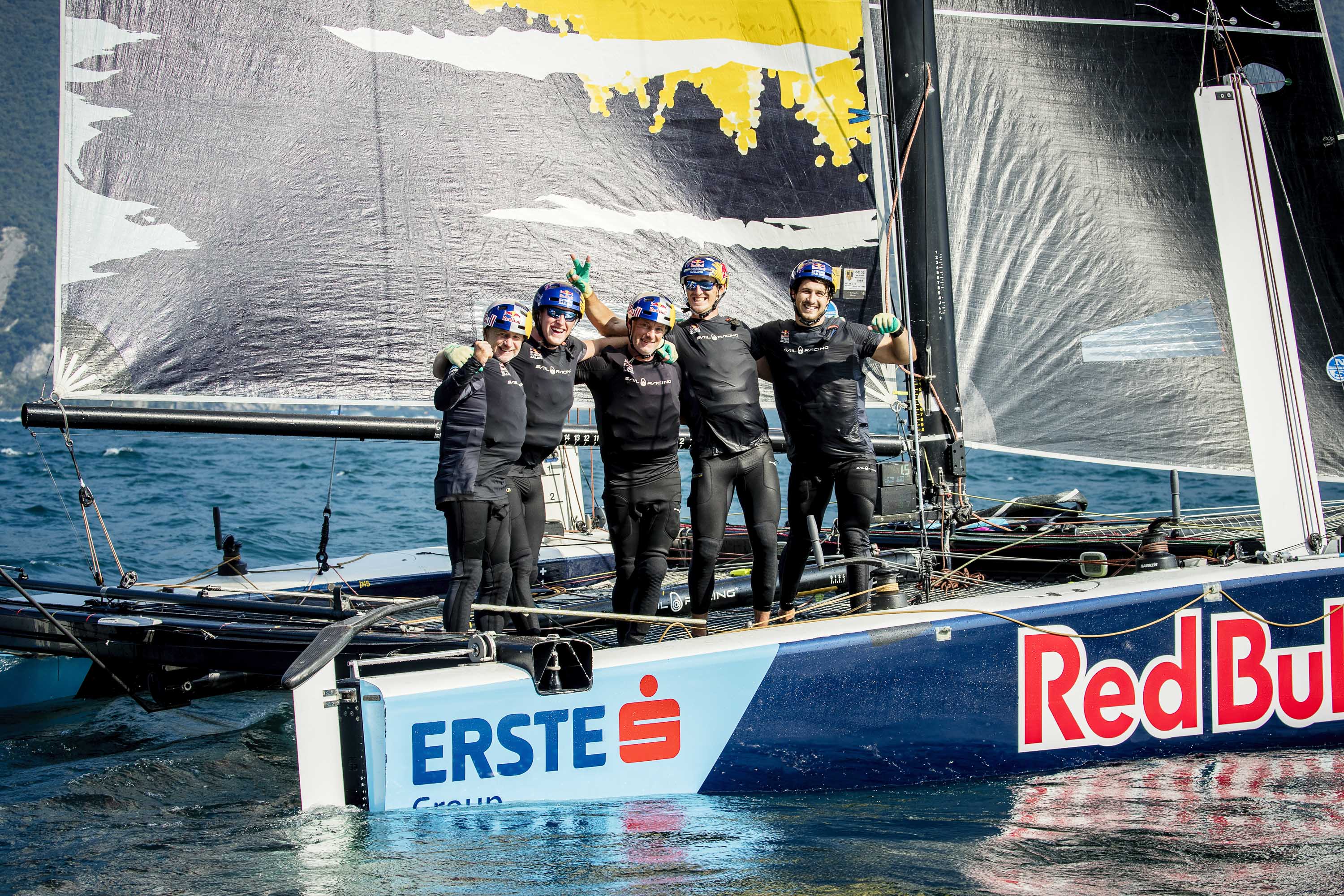 Red Bull Sailing tightened its grasp on an overall podium spot in the 2019 GC32 Racing Tour with third place at Riva del Garda, Italy, and set the regatta speed record in the process. In Sunday’s tie-breaker climax to four days of racing, Switzerland’s Alinghi was awarded first place, with Oman Air second. Now only the season’s finale – in Oman – awaits.

Riva del Garda (ITALY) -With typically strong winds that come from the north in the mornings and from the south in the afternoons, Lake Garda is a benchmark venue for foiling catamaran competition, and one of skipper Roman Hagara’s favorites. The Riva Cup was also the closest thing to a home race for the Austria-based team, and with their fan club in attendance to cheer them on, Red Bull Sailing came into the fourth act of the 2019 campaign with the momentum of a podium at Palma del Mallorca, Spain that had launched them to third place overall.

The race in the shadow of Riva’s cliffs was the penultimate stop in the five-act series, and with the standings tight, teams were desperate to gain traction. Across the 19-race showdown, two major battles kept the crowds riveted, as Oman Air and two-time America’s Cup winners Alinghi slugged it out for the lead at the top of the standings, while Red Bull Sailing fought to hold off a fierce charge from French foes Zoulou in the struggle for third.

Red Bull Sailing not only held off Zoulou, but delivered moments of sheer brilliance that took the fight right to the leaders. The team started strong with a race win on Day One, and after slipping behind their French rivals on Day Two, powered back on Saturday, then dominated the French team with a win and two second-place finishes on the final day. Even in the last race, when Alinghi took it to the next level to clinch the regatta triumph, Red Bull Sailing kept pace, finishing just 0.12s behind the two-time America’s Cup winners and ahead of the team from Oman. In total, Red Bull Sailing earned a total 12 podiums for the regatta.

When it came to flying on their foils, Hagara and Steinacher made the most Lake Garda’s perfect conditions, clocking the best speed of any team at 38 knots (70 kmh/44 mph).

Long one of the favorites in the Extreme Sailing Series, Red Bull Sailing is new to the GC32 Racing Tour this season, and has quickly gained footing among the likes of America’s Cup and Volvo Ocean Race contenders in the lineup. In addition to Hagara at the helm and Steinacher as tactician, the team includes Sweden’s Julius Hallström (bowman) and two Australians, Mark Spaermann (board trimmer) and Rhys Mara (trimmer). The young international crew have gelled rapidly with the Austria’s Olympic Tornado-class legends to form a formidable force.

QUOTE: “I’m extremely happy, not only with our result, but also because together we are showing strong consistency. Our teamwork and our boat setup are both working extremely well for us. Now, we are highly motivated and fully focused on the big season finale in Muscat in November, and our goal is to finish the season with the regatta victory there.” Roman Hagara, Skipper/Helm, Red Bull Sailing Team

Next on the calendar for Red Bull Sailing: The the final and deciding event of the 2019 GC32 Racing Tour, the GC32 Oman Cup in Muscat on 5-9 November 2019. On open waters in the heart of the city, Hagara’s team will be racing to give Austria its first overall GC32 Racing Tour podium in only their first season on the circuit.

Images for editorial use only. Credit: Samo Vidic for Red Bull Content Pool

About the GC32 Racing Tour
The GC32 class sets sail into 2019 with a circuit that’s stronger than ever, thanks to its teams consolidating in the GC32 Racing Tour. Course configurations are similar to those used in the America’s Cup, and venues are chosen with the aim of providing the best chance of optimum conditions to get the catamarans flying on their foils. The 2019 tour visits four venues across southern Europe and concludes with a fifth race that, for the first time, will be outside Europe. Schedule 2019: