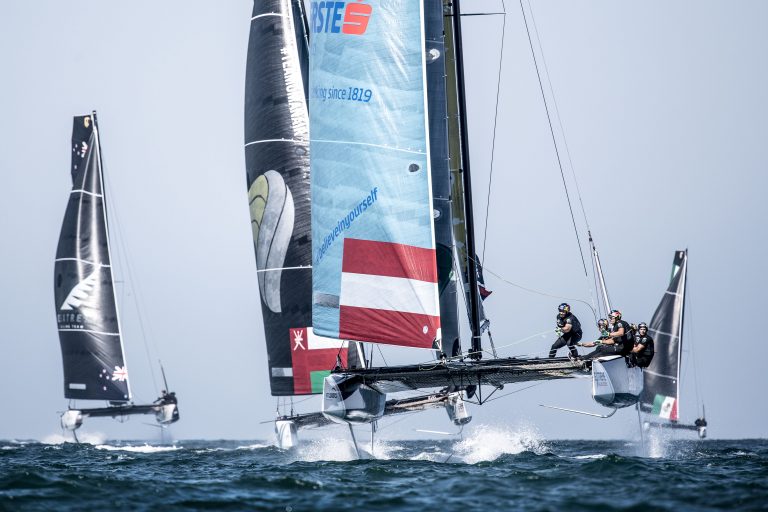 It was trial by fire for skipper Roman Hagara’s brand-new Red Bull Sailing team at the first regatta of the Extreme Sailing Series 2018 in Oman. Helmed by Chris Draper, the team fought back from a massive crash on day three to take a win in the final races, pulling themselves up to a top-five result. In a nailbiter, 2016 champions Alinghi (SUI) grabbed the top of the leaderboard with the regatta win, edging defending titleholders SAP Extreme Sailing (DEN) into second. Meanwhile, Olivia Mackay (NZL) helmed Red Bull to a strong second place in the Flying Phantom Series.

MUSCAT (Oman) – The regatta win came down to the final race on Saturday, but Red Bull Sailing’s chance for victory was gone on day three, when their GC32 collided with New Zealand’s NZ Extreme Sailing team in strong breezes on the tight stadium format, sustaining significant rudder damage. It was the first major test for the brand-new team from Austria – led by two-time Olympic champions Hagara and Hans Peter Steinacher. After a long night of repair, they proved their resilience by taking four podiums, including a win, on the final day. With seven acts to go, they’ll have to battle up the standings against the likes of Alinghi and SAP, who were neck and neck in the regatta until a bad start for SAP in the last race clinched Alinghi’s triumph.

“It’s a tough start to the season, but I’m happy with the teamwork and speed we achieved, so we’ll take what we can from the experience and move forward,” said Hagara after the racing was completed. “We’ve got really good sailors on the team, and they have shown their potential by winning a race right from the second day on the boat, then pulling together after the collision to come back and get another win today. We’ll aim for a fresh start to the season at the next stop in Italy.”  Bringing experience from two America’s Cup campaigns, Britain’s Draper was a steady hand at the helm, joined by Neil Hunter (UK), Ed Powys (UK), Rhys Mara (AUS) and Dan Morris (USA). The positives were there – from taking pole position on the very first day – and Draper has high hopes for the rest of the season.

“We were moving quickly, the input from Roman and Hans Peter was fantastic, and the guys were stepping up, so the crash was very frustrating,” stated the helmsman. “But with eight podiums and two wins behind us now, we’re looking forward to the World Championship at Lake Garda, and we’re going to bring everything we’ve got.”

Also in Oman, the second season of the Flying Phantom Series kicked off with the first of four faceoffs at Extreme Sailing Series acts in 2018. Olivia Mackay and Micah Wilkinson, winners of the Red Bull Foiling Generation World Final in 2016, opened Red Bull Sailing’s defense with a close second-place finish behind Team France Jeune.

The Red Bull Sailing Team will continue their campaign when the Extreme Sailing Series and the GC32 Racing Tour fleets combine for the first-ever World Championship since the GC32s became a World Sailing-recognized class in 2017. It all happens at beautiful Lake Garda, Italy on 24-27 May 2018.

Images for editorial use only. Credit: Dean Treml for Red Bull Content Pool

About Roman Hagara and Hans Peter Steinacher
Roman Hagara and Hans Peter Steinacher are Austria’s most successful summer sport athletes, having won two Olympic gold medals (Sydney, Athens) and numerous world championships. They are the only Austrians to have competed on the America’s Cup World Series. Determined to see sailing progress to the next level, they groom the next generation of sailors by leading the Red Bull Sailing Team in the Extreme Sailing Series and by serving as sports directors for Red Bull Foiling Generation and the Red Bull Youth America’s Cup in 2013 and 2017.