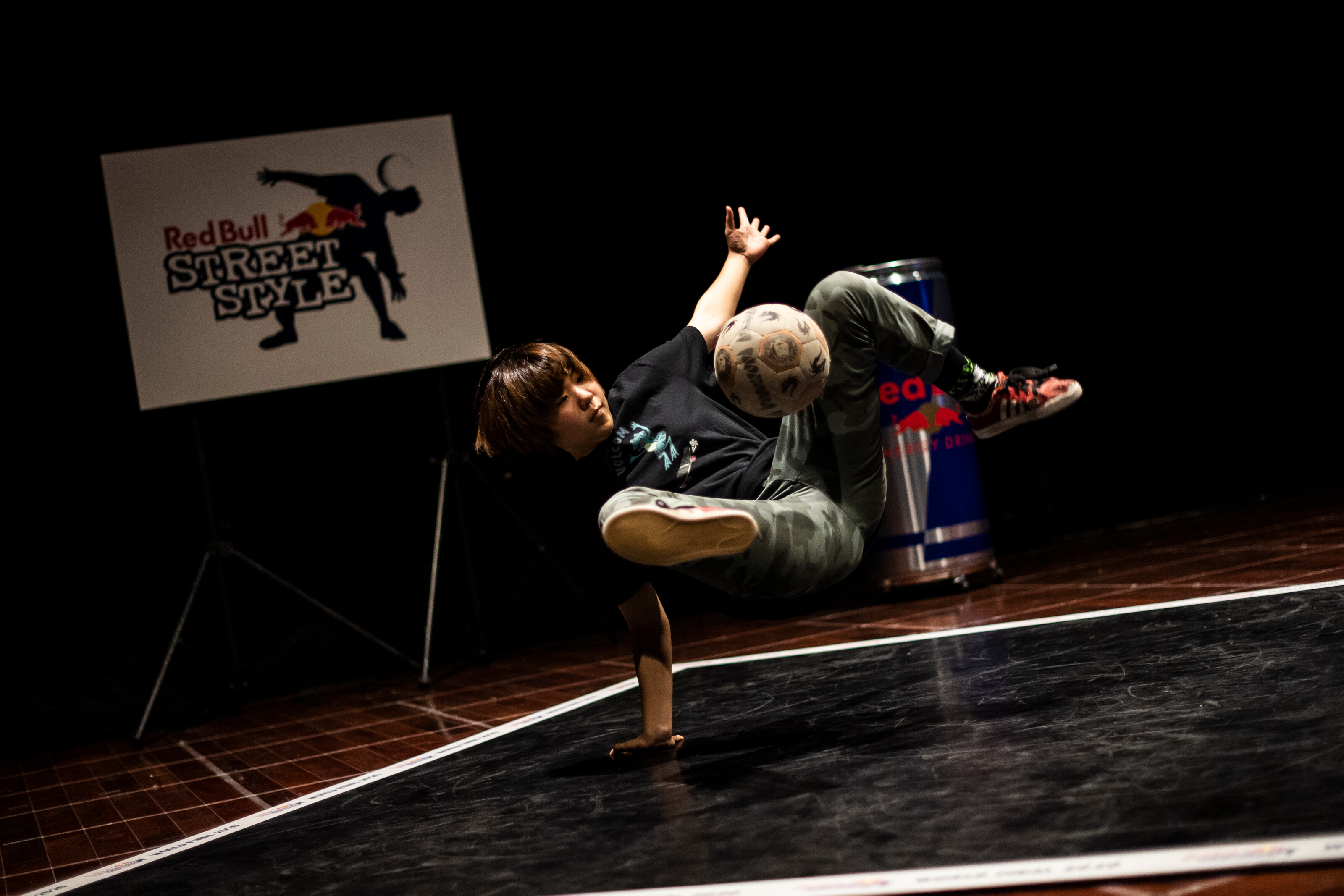 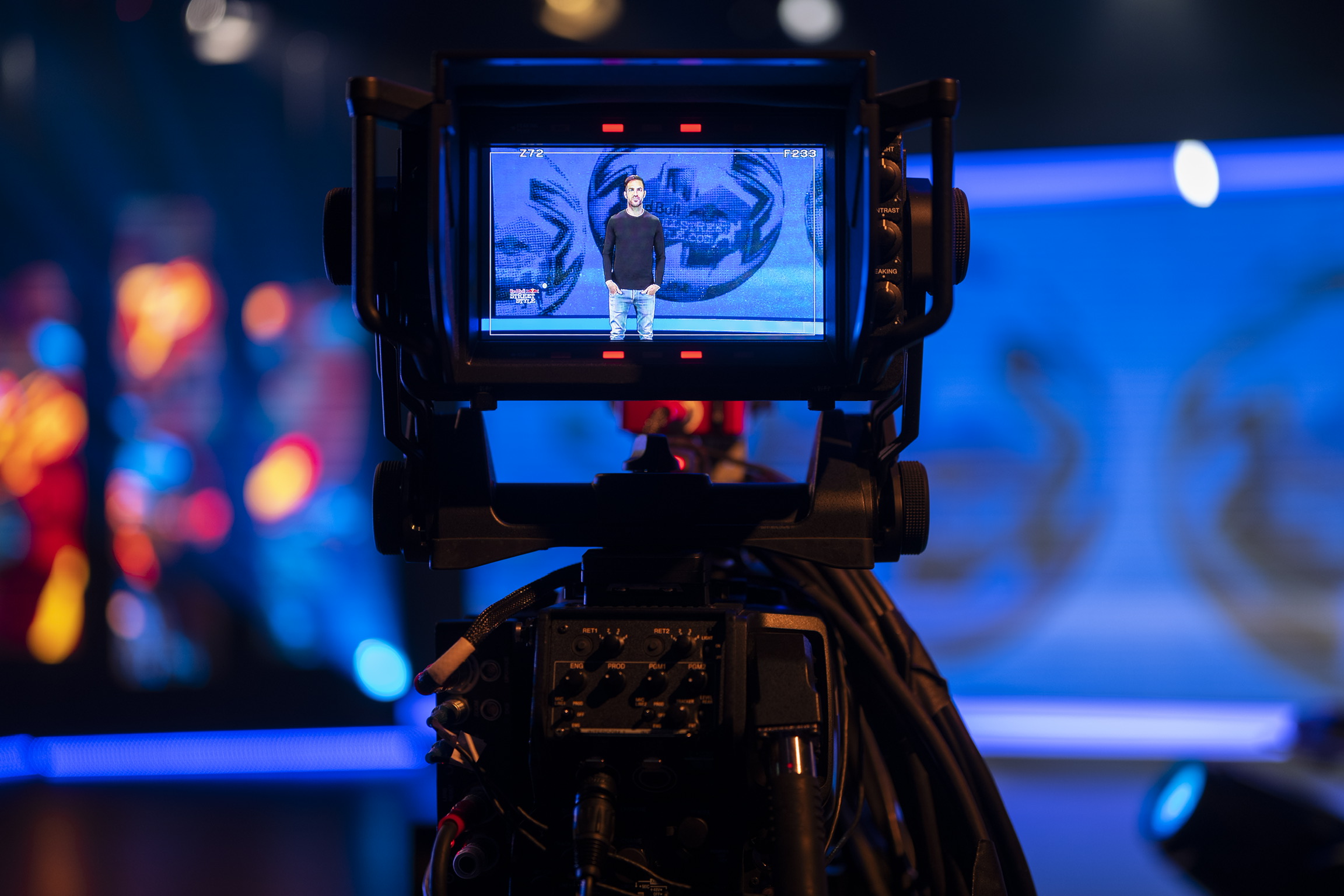 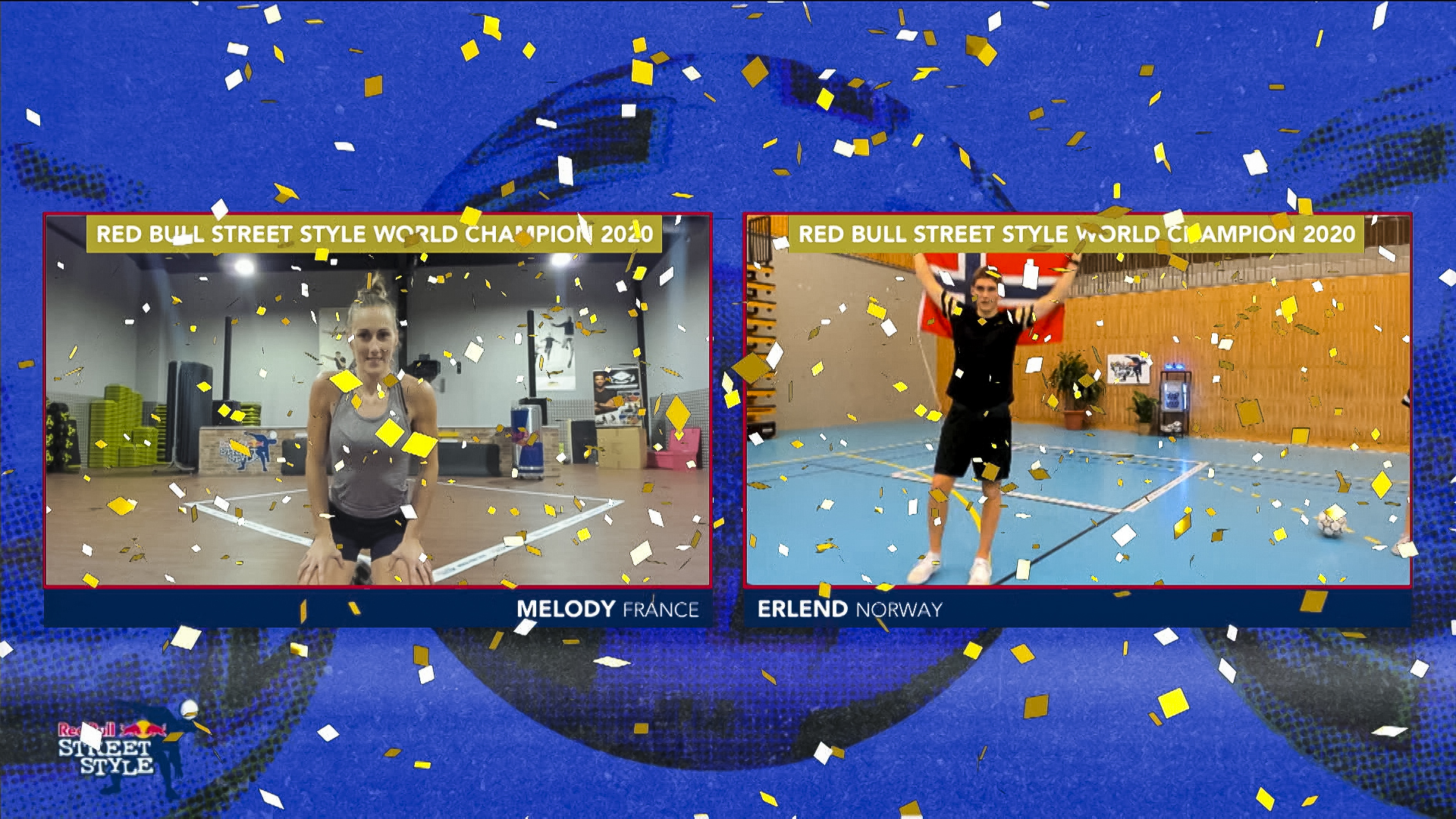 Winners ceremony during the Red Bull Street Style World Final in Salzburg, Austria on November 14, 2020. NOTE: This is a freeze frame from the live stream. 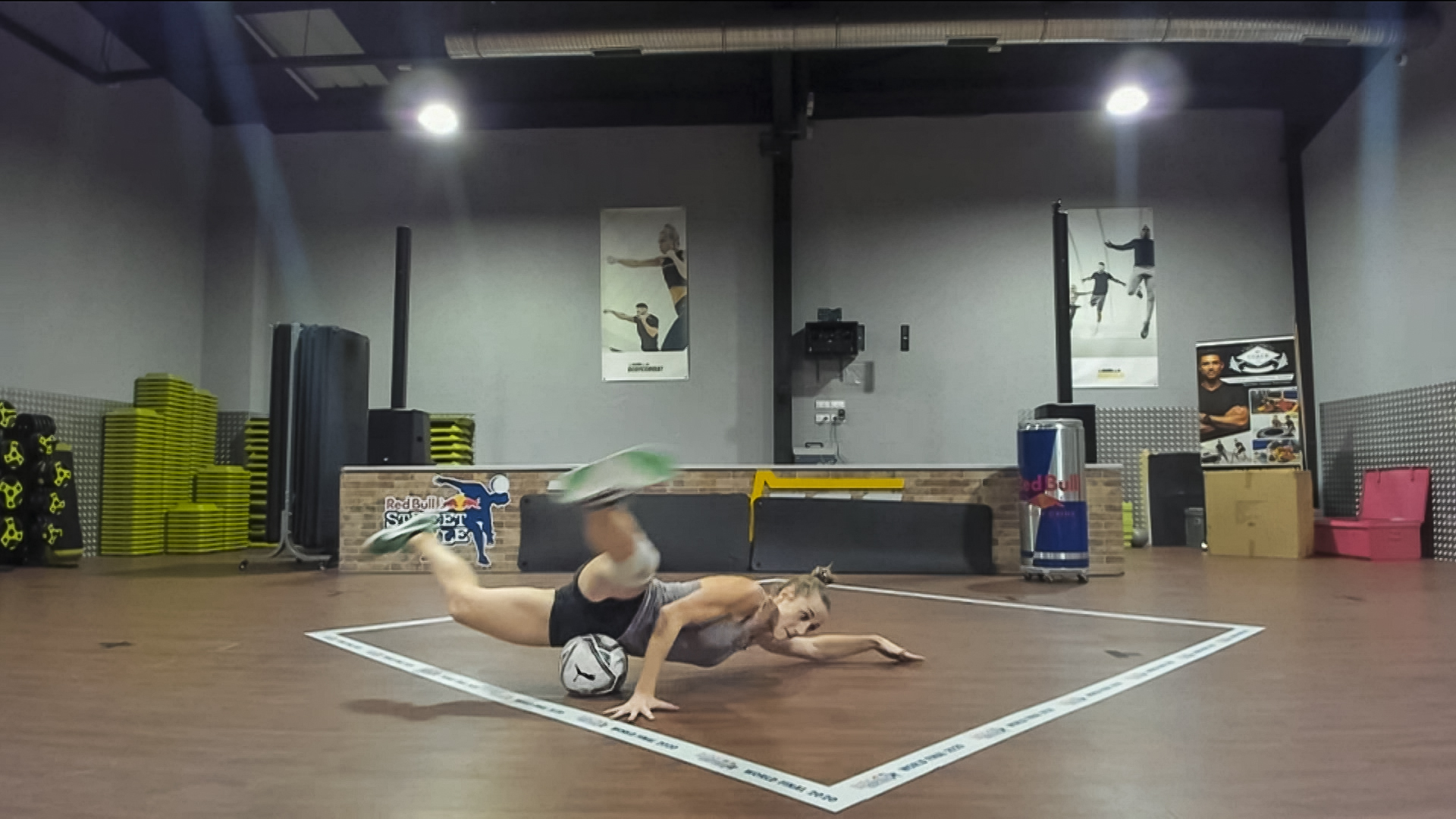 Melody performs during the Red Bull Street Style World Final in Salzburg, Austria on November 14, 2020. NOTE: This is a freeze frame from the live stream.

In an unprecedented all-digital World Final, French legend Mélody Donchet became the first athlete of any gender to claim four wins in the official World Championship of freestyle football, while Erlend Fagerli of Norway achieved a long-awaited grail as the only freestyler in history to earn a second title in men’s competition. Best Trick honors judged by football superstar Cesc Fàbregas went to Norway’s Brynjar Fagerli and Hungary’s Kitti Szász.

After months of competition featuring athletes from around the globe, the climax of the first freestyle football World Championship to be held entirely online saw 24 players from 11 countries battling head-to-head, live online across thousands of miles. But in the final moments, the last two contenders were Norwegian brothers tricking just meters away from each other in the same gymnasium. Here’s all you need to know.

–      Ever since the first Red Bull Street Style tournament in 2008, the World Final battles have been held on stage in front of large crowds in global destinations – but this time, the participants, the judges and the spectators were all online across a range of time zones. Whether they were streaming from Japan or Iran, Colombia or the Philippines, the UAE, the USA, the UK or Europe, the structure was the same: two players answering each other’s challenges in three intense back-and-forth rounds of 30 seconds each.

–      The men’s final pitted current Norwegian national champion Brynjar Fagerli against the 2018 Red Bull Street Style World Champion, his younger brother Erlend. The pair threw down eye-popping trick after trick, driving the judges to a split decision. It all came down to the vote for Originality, and Erlend’s fresh moves gave him the nod. Third place went to Sebastian Peña Morales, a Colombian contender known as the “Machine.”

–      The women’s action came down largely to high-intensity battles among the three women who together hold all the World Final championships ever awarded. Donchet, who needed to come back from knee injury as she has so many times in her career, defeated two-time World Final winner Kitti Szász of Hungary in the Semi-Finals, then had to face 2018 champion Aguska Mnich of Poland in the final. But the French legend was unstoppable, combining technical moves with flair like breakdance spins to extend her legacy.  Szász took third place, but Lia Lewis of the UK – the newcomer she faced in the bronze medal match – is one to watch.

–      Viewing from home in Monaco, World Cup Champion and two-time European title-winnerCesc Fàbregas was the exclusive judge for the Best Trick competition. The Spanish “assist king,” who currently plays midfield for AS Monaco, awarded the men’s crown to Brynjar Fagerli for his Next-Door with a Roly-Poly and called out Szász for her innovative karate kick moves.

–      The WFFA judging panel was made up of five famed international freestylers, each focusing on a different criterion: Head Judge Gautier Fayolle of France (Performance), Luca Chiarvesio of Italy (Difficulty), Michal “Michryc” Rycaj (Originality), Martin Schopf of Austria (Execution), and – the first-ever female judge on a World Final panel – Jasmijn Janssen of the Netherlands (Overall).

–      Presented in collaboration with the World Freestyle Football Association (WFFA), the Red Bull Street Style World Final is the official World Championship of freestyle football. Only the most creative, technical and stylish player in each gender can earn the title of Red Bull Street Style World Champion. In the new online format, Red Bull Street Style 2020 was open to everyone around the world, and talents from 93 countries entered by submitting videos of their football skills. By the World Final, a series of challenges had whittled the field to the best of the best: 16 male and 8 female footballers.

–      For 2021, Red Bull Street Style will return with a combination qualifying process to be announced, culminating with on-stage battles for live crowds at the World Final, to be held in Spain in the last quarter of the year.

Watch the groundbreaking football tricks from the 2020 Red Bull Street Style World Final for yourself, live-on-demand on Red Bull TV and on YouTube.

“I’ve been working so hard for this. I’ve been training freestyle for nearly 12 years, and especially for this competition I’ve been training really well with Brynjar. To battle him is always so difficult. I had to give my all, my very best. The online conditions worked really fine. I managed to show some new variations, so I’m really happy with my performance and so happy to be the champion of 2020. But it’s not just about winning, it’s about always evolving and showing your style – and having fun!”

“I feel good because I couldn’t train for eight months due to an injury. Because of my knee I thought I would not be able to win because I couldn’t work on my lowers anymore, or even on all there is to do standing. I tried to do as much as I could with different moves, but I never thought this would happen – never, never never. So I’m happy, and I also want to credit all the female freestylers who participated and give props to all the newcomers.”

“I really had a fantastic night, it was amazing. I was looking for creativity, and I saw moves I could never do in my dreams. The competition level was so, so high – I saw people bringing new things every time. Congratulations to all, because they are true winners.”

“We have been all around the world with Red Bull Street Style over the years, and this time it was a new format. Freestyle football is about energy, it’s about how you bring what’s inside of you to the ball. You can reach this level if you are really, really passionate, and everyone was really strong.”Photocredit: Marc Schwarz for Red Bull Content Pool